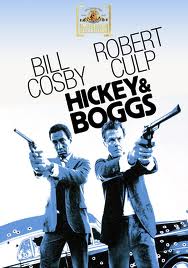 Rather flawed, but still very good,

Hickey & Boggs is not entirely successful – in fact, it has some major flaws – but it creates a powerful mood, and that’s what makes it worthwhile. I will remember it, for a long time perhaps. In similar cases, the flaws will gradually fade from my mind and the film will seem better in my memory. Unfortunately, I’m pretty sure that the next time I watch the film (I had to get it on tape) the flaws will again be too big to ignore.

The biggest fault is the film’s editing. It’s awful. I can’t remember any other film where the quality of editing was such a big issue, but this is definitely one of them. Take, for instance, the shoot-out at the football stadium. The setup, where they cut to the various people involved in the proceedings, is very confusing and almost silly. You can’t, for instance, tell where people are in relation to each other. When the action starts to go down, it should be quite exciting.

Unfortunately, again, the editing never makes it clear where the characters are in relation to each other. It’s even difficult at times to tell who’s shooting at whom. Near the end of the sequence, we see one character run past another who has been guarding him with his machine gun. I had thought that the second man had been shooting at both him and Hickey.

I could then finally tell what had been going on, but that doesn’t help generate the past suspense and logic that that scene needed. The editing is also very quick, especially in the film’s first half. It makes the story difficult to follow. Luckily, the editing gets better as the film progresses, but it’s never perfect. Surely the editor deserves a lot of the blame – he clearly didn’t have much of an idea what he was doing – but Robert Culp is partly culpable (ha-ha) as well. The editor is not the only culprit (there I go again) in that aforementioned stadium shoot-out. Part of the confusion is due to sloppy direction. Most of his direction is quite good, however. Some of it is downright excellent. This was his one and only film. Imagine how much better he could have gotten.

The script is also quite sloppy. Again, a lot of the confusion is due to the editing. Many scenes happen too quickly. But, on the script’s side of the scale, I was never 100% sure who the different groups were. By the end, I was mostly sure, but there was still a bit of confusion. I would compare Hickey & Boggs greatly with Chinatown, which was made two years later. But unlike Chinatown, which also has a very intricate mystery story, Hickey & Boggs is never able to make sense out of the whole story. We shouldn’t still be trying to figure out what has happened or who certain characters were when the end credits begin to roll.

I also think that the film has a few too many P.I. movie cliches. Even Hickey’s family situation, which is where the film gets most of its emotional power, is rather formulaic. Hickey is the type of guy who’s too into his job, and his wife’s angry at him all the time; Hickey still loves his wife and child, but he’s not the greatest father (they actually develop his poor fatherly skills quite well). I would also have wanted more backstory to Boggs, although I kind of like the way the screenplay only hints at his life. They also needed to invest a little more emotional pull in the characters of Mary Jane and her husband. They tried, but didn’t quite succeed. Just think of how powerful their last scene would be if we knew them a little better.

Now for the acting. The supporting cast is generally adequate, with one exception (a good one): James Woods. It was his second feature film, and he’s already showing how great an actor he would become. His character is created rather sloppily, but he’s still good in the role. Of course, Culp and Cosby are the main focus of the film. Culp, despite the fact that he directed, is actually more of the supporting actor. He’s quite good, although, like I said, I wish that he had a more in-depth part. Cosby, on the other hand, is exquisite. I would doubt that he’s ever had a better role in his life. His dramatic prowess is amazing, and he has several masterful scenes where his job is to remain rather emotionless, thereby multiplying the emotional effectiveness. It works wonders, and he should probably have been recognized for the performance.

As for other aspects of the film, the cinematography, by Wilmer Butler, is quite beautiful. He does a great job of bringing out the inherent darkness of sunny L.A. He also does a lot of magic hour stuff, and it is quite beautiful. I especially like the final shot. The musical score should be mentioned as well. Ted Ashford’s score is very evocative, and it doesn’t fall into the cheesier, Shaft-type funk, which I was expecting. George Edward’s theme song is also very good. Also, the sound effects are great. That’s odd to point out, but you’ll definitely be influenced by some of them. Sometimes, sirens, like tornado sirens, arise out of nowhere and no one on screen aknowledges them. At other times, you’ll hear this spooky, unembodied laughter.It’s very disturbing.

Overall, I give Hickey & Boggs an 8/10. It should have been better, it could have been an equal to Chinatown. It is still a very worthwhile film that ought to be more available and more famous.