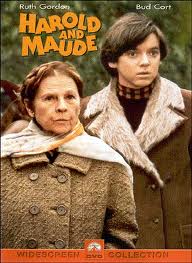 Very of its time but still wonderful,
Harold (Bud Cort) is in his 20s. He’s always depressed, has no friends and, for fun, attends funerals. At one he meets Maude (Ruth Gordon) who’s almost 80. She loves life and she brings Harold out of his shell. They quickly fall in love.

A deserved cult film. This (understandably) bombed as a mainstream movie (it was considered too dark) but was a big hit when it started playing the midnight movie circuit in the 1970s.

This is VERY 70s in terms of style, music (Cat Stevens) and its general laid-back attitude but it still works wonderfully. I never found Cort that good (he’s TOO blank-faced) but Gordon brings the movie to life. She sparks every scene she’s in–she seems to be having a whale of a time in her role. She’s helped by a wonderful script that has some of the best observations on life that I’ve ever heard. My favorite is, “Everybody’s allowed to make an a** out of themselves once in their life”.

The movie is very quiet and laid-back and the black humor (which is actually pretty mild) may turn off some viewers. Still I love this movie! I’ve seen it multiple times and never get tired of it. A 10 all the way.

Also the dates Harold’s mother sets up for him are hilarious!

This is the movie The Graduate should have been,

Harold and Maude is a perfect movie. It’s extremely well written and well acted. It reminded me a lot of The Graduate, a movie which I liked but felt was not all that special. Harold is much like Benjamin from that movie, but he’s such a jerk. And Mrs. Robinson is also completely unlikable.

Harold and Maude has to be the most uplifting film I have ever seen. It is one of those rare films which makes you re-examine your life in a positive way. I beg you to see it. One rarely sees films of this caliber.