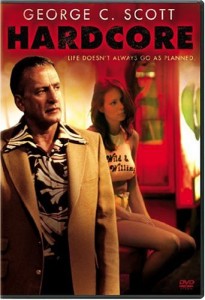 I’m not a big fan of Paul Schrader, but I really dug this film! Personally, I think `Hardcore’ is Schrader’s best film, as it successfully mixes effective social drama with compelling tension. George C. Scott is truly magnificent as the hardworking, Midwesterner Jake Van Dorn who individually searches for his lost preteen daughter.

At first, he cooperates with a private-detective (a very convincing Peter Boyle) who discovers that his offspring is now active in the hardcore porn-industry. Later, Van Dorn forms a partnership with a poor whore who brings him into contact with the right persons in the business.

The first hour of this film is really good and works on many levels. Not only does Schrader mixes different social mentalities and religious convictions, he also gives a perfect portrayal of how someone is driven to complete distraction. The sequences in which Van Dorn witnesses his own flesh and blood feature in a sexfilm are truly intense and vindictive. Of course, the pornography shown isn’t real (or even explicit) but you can easily imagine what a father’s reaction would be. And please keep in mind that the film is now 25 year old and the censorship has changed a lot since then.

Unfortunately, Van Dorn’s private investigations aren’t always credible (Scott dresses up as a stereotypical adult film-director and organises a cast-session) and the ending is rather abrupt and unsatisfying.

Nevertheless, `Hardcore’ is a dreadfully overlooked film and one of the most efficient thrillers of the late seventies. George C. Scott is truly brilliant and I personally think this was his best period as an actor. A year later, he starred in the unforgettable horror-chiller `The Changeling’ and gave away an equally brilliant performance. If you appreciate good thrillers, you have to give `Hardcore’ a chance.