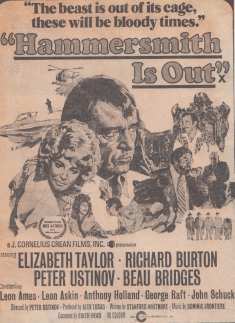 “Let me out! I’ll make you rich & strong!”
I have not seen “Hammersmith Is Out” (1972) in at least a quarter-century, but this take on “Faust” has stayed with me all these years.

This movie is hilarious!

Why it hasn’t been on TV, cable or otherwise, is beyond me. It’s directed with decidedly politically incorrect tongue-in-cheek satirical panache by none other than Peter Ustinov, letting down his stiff British upper lip.

Richard Burton as Hammersmith was in full-blown “have fun living life with a nod, a wink and a fifth of Scotch” phase, this coming at the phase-out of the Swingin’ Sixties and four years after the masterfully, purposefully over-the-top glory of his poet, Macphisto, in the cinematic wonder that is “Candy” (1968).

Through a manner I’ll never explain (my lips are sealed, my fingers frozen), complete psycho Svengali Hammersmith is able to turn the absolute dumbest hayseed the world has ever known, Billy Breedlove (Beau Bridges, who’s a scream) into the world’s richest man.

Along the way, they pick up the dame, an almost equally dumb and hilarious Elizabeth Taylor, who is such a knockout that words defy description. Zonga!

One pretty good example of the type of comedy this is, is demonstrated by the band playing onstage at a club the trio check out: it’s an all-girl topless band called the Tits.

Hey, it works for me. Haha!

Let’s hope some enterprising programmer digs this one out. The world must see it.