Guess What Happened to Count Dracula?

Guess What Happened to Count Dracula? – 1970 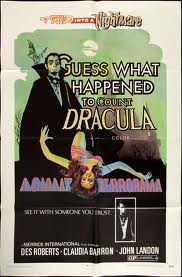 Reporter Mike Waters enters a desert cave and finds Dracula the Dirty Old Man, a vampire babbling like a borscht-belt comic and wearing a hairpiece that resembles a dead skunk. Under Dracula’s spell and renamed “Irving Jackalman,” Mike turns into a werewolf and attempts to lure women back to the castle.