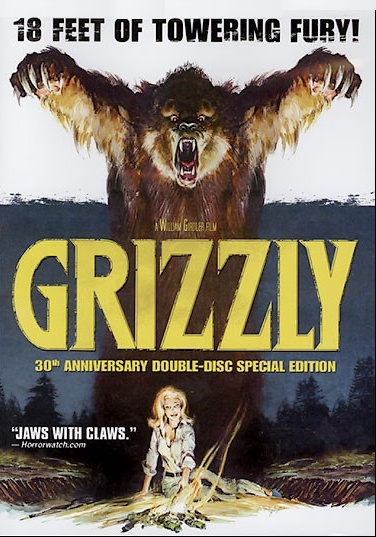 Grizzly is directed by William Girdler, written by Harvey Flaxman & David Sheldon and stars Christopher George, Andrew Prine & Richard Jaeckel. Story sees a giant Grizzly Bear terrorise campers and hikers at a state park. The head park ranger sets about capturing and killing the beast but he’s met with resistance from his superior and troubled by the number of glory hunting hunters who descend upon the park.

If you pardon the pun, Grizzly was a monster surprise hit of 1976. Made for a paltry $750,000, it went on to make over $39 million Worldwide. It may well be a “Jaws” coat tail hanging copycat (and it unashamedly is), but credit where credit is due, William Girdler & David Sheldon spotted an opening in the market and got in there in a blaze of blood, grue and roaring ferocity. It was also one of the first of a number of “Jaws” knock offs, and while it’s silly at times, and beset with bad acting, it is, however, one of the most popular and fun cult horrors of the 1970s. Filmed on location in Clayton, Georgia, Girdler’s movie knows exactly what it’s about. Keeping it relatively free of extraneous and expositional filler, Girdler knows (and so does the cast) that the bear is the star of the show; well more to the point, that the bear shredding and chomping down on humans is the star of the show. And so it goes, the humans-except for our hero protagonist (George) & wise sage naturalist (Jaeckel)-are annoying and lining up to be either bear lunch or to be proved wrong. And what fun it is. It’s the sort of film that scared us to death as kids, and now makes us smile as adults.

The film has proved popular enough over the years to warrant a double disc DVD release. A release that wouldn’t be out of place for some critical Oscar winning darling I might add! Now available in a quite lovely anamorphic widescreen presentation (2.35:1), Girdler’s (and cinematographer William Asman) shooting around Clayton is very pleasing on the eye. Sure some of the inexperience of the editing and lighting departments exists, and the budget restrictions are now even more evident (check out the blood), but Grizzly actually does look rather nice. The extra disc is chock full of goodies, with the “Jaws With Claws” featurette enjoyable and showing the makers to be very tongue in cheek about the whole thing. So, a must for B movie creature feature fans who don’t mind a bit of camp on their cheese sandwich then. Those looking for Alien or Gorilla’s In The Midst obviously need not apply. 6/10 for the film, 7/10 for Shriek Show’s 2 disc DVD package