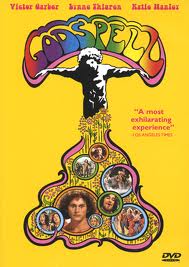 By all rights, a terrible, wicked movie. The Gospel According to Hippies, hippies played by several extraordinarily attractive young people who make cute faces and speak in cute voices. This film is proof that the late 60s and early 70s were the root of the current hyperactivity problem. Watching this film is like seeing ADHD getting invented before your eyes. Also, what’s with David Haskell? He plays John the Baptist, later turns into Judas Iscariot, and is obviously made up to look like the traditional Jesus. Why so confusing? And I hope this doesn’t spoil anyone’s fun, but John the Baptist gets decapitated and Judas hangs himself in the Book, but Mr. Haskell gets to live on until the end.

Look, I’m no Christian, but I can feel the power that exists in the story of Christ. Pier Paolo Pasolini’s The Gospel According to Matthew, the definitive film adapted from the Bible, brought me to tears. Godspell effectively sits on the Holy Book and flatulates for an hour and forty minutes. You could not imagine a less respectful adaptation. Yet, I couldn’t totally hate this movie. It does pull itself together for its final twenty minutes or so, and rediscovers some of the power in the original writings. It’s also a musical, and, as a musical, it contains some great songs. I’d say that there really are only a handful of movie musicals with really amazing songs, and Godspell is one of them.