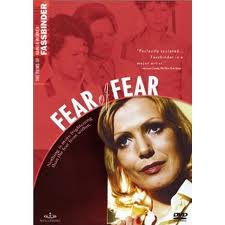 An unknown gem by Fassbinder, one of his best works,

Really, the plot is nothing different than your average movie on the Lifetime cable network: a woman suffers from post-partem depression while no one around her seems to care much, eventually, she becomes addicted to Valium and alcohol. But what a difference a genius can make, and Fassbinder is clearly a genius. And his lead actress, Margit Carstensen, gives an absolutely brilliant performance.

It’s a small and subtle picture (made for television, actually), and I wonder if anyone else would be as impressed as I was. But I really felt that Fassbinder and Carstensen captured something remarkable here.

The other actors are fine, as well. Ulrich Faulhaber plays her odd husband. He cares for his wife, but probably not in the way she needs. I noticed early in the film that he never touches his wife, and later in the film his mother complains that it is abnormal the way the mother hugs and kisses her children. The nosy mother-in-law is played by Brigitte Mira, looking really ugly after making me cry in Fear Eats the Soul, made the previous year. I would say that that character is a cliché if I didn’t know so many people exactly like her! Irm Herrmann plays the sister-in-law, and Adrian Hoven plays a pharmacist with whom Carstensen begins an affair after her prescription for Valium runs out.

These two characters have the kind of hidden depth that make the film so good. The same can be said about Kurt Raab and Ingrid Caven, both playing other people with psychological problems, the former appearing once in a while in the streets and staring knowingly at Carstensen, the latter Carstensen’s roommate at an asylum in which she undergoes some treatment; when Carstensen is undergoing sleep therapy, Caven desperately wants to converse with her, but when she is awake the woman becomes catatonic.

Peer Raben’s music is excellent, as always, and Fassbinder uses the music of Leonard Cohen wonderfully (as he also did in his more famous 1975 film, Fox and His Friends). 9/10.