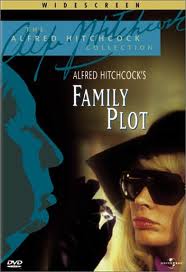 No, not great Hitchcock, but entertaining nonetheless,

Family Plot differs from all the other Hitchcock films. It lacks suspense, for the most part, and it is not as funny as many of his films. Instead, it is just an amusing little yarn. I like the way the film starts with two separate plot lines which gradually merge. Even if it is not the most original thing in the world (especially since two of Family Plot’s stars were main players in Robert Altman’s Nashville), it still makes the film interesting. If anyone else had made this film, it probably would be more fondly received by the public, although I doubt anyone would still be watching it today.

The two characters with whom we begin the film, whom we would consider the heroes, are the best, and are played lovingly by Barbara Harris and Bruce Dern. She’s a hack psychic milking old ladies out of pensions, and he’s a cabbie who cannot find enough time both to drive his cab and participate in Harris’ schemes. Although the characters aren’t as well developed as those in numerous other Hitchcock ventures, they’re entertaining.

The other couple, Karen Black and William Devane, fare less well. They’re more crafty in their crimes, perpetrating large-scale kidnappings for enormous ransoms. Karen Black’s character is very underdeveloped, hardly showing any depth. What character she does have is not entirely believable, since Karen Black seems too nice to play a hardcore criminal. William Devane is decent as the sinister mastermind, but the history provided to his character is far more brutal than is believable (he locked his adopted parents in their bedroom and set fire to their house).

I liked the idea of the small time crooks clashing with the professionals, and I liked the outcome of the film. All in all, it is decent and worth watching. It does not feel anything like a Hitchcock film, so I wouldn’t expect anything like Vertigo or Rear Window when approaching this, his swan song. 7/10