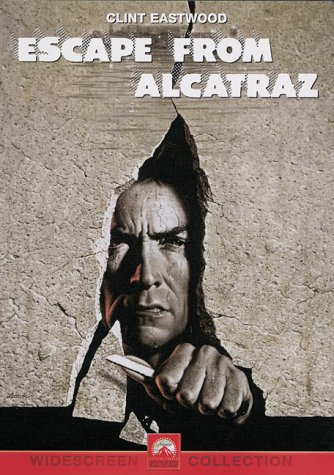 Could Have Been So Much Better,
This is based on a true story of how Frank Morris and the Anglin brothers escaped from Alcatraz prison . The story occasionally crops up on The History Channel and it’s an interesting story more than an exciting one and to his credit director Don Siegel does preserve some integrity by making the story interesting rather than exciting and does leave the ending very ambiguous since no one found out the eventual fate of Morris or the Anglins . Did they escape ? Did the sharks get them ? Nobody knows so Siegel resists the temptation to give us his speculative opinions . If only Oliver Stone had taken a leaf out out of Siegel’s book

There is a problem with ESCAPE FROM ALCATRAZ that can be firmly delivered to Siegel’s door and that’s with casting Clint Eastwood as Morris . As soon as the credits open and Eastwood steps off the boat you’re well aware that you’re not watching a character actor playing a real life character – You’re watching Clint Eastwood play Clint Eastwood , or more accurately Clint Eastwood reprise his role as Harry Callghan which ruins the film somewhat . Look at the scene where Wolf comes on to Morris in the showers . Weren’t you just expecting the line ” Go ahead punk make me gay ” . At no time do you feel that Morris is in any kind of danger from any inmate because the role is played by Eastwood.

It’s by no means a terrible movie and as some people have noted the story doesn’t suffer from dramatic embellishment that Hollywood does frequently and badly – If the proceedings go very slowly that’s to illustrate the grinding tedium of doing time . But the movie would have worked much better if Siegel had cast a fresh faced unknown in the role of Frank Morris , but there again a movie studio has to make profits at the box office