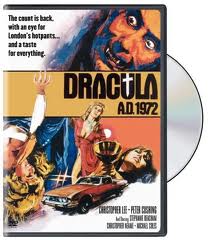 Easily one of the worst Hammer Dracula films,
Film starts off great in 1872 with a violent, bloody fight between Dracula (Christopher Lee) and van Helsing (Peter Cushing). Dracula is impaled and dissolves to dust–van Helsing also dies. Somebody gathers Dracula’s ashes and buries them in the grounds of a church. Cut to 1972–here’s where the film falls apart.

We are instantly hit over the head with loud, bad 70s music, HORRIBLE fashions and silly dialogue. When this was made Hammer was losing money and decided to try anything to get a hit. Putting Dracula in the 1970s was NOT a good idea. The fashions, music and dialogue date the movie horribly. We’re introduced to a bunch of annoying kids in their 20s who decide to have a Black Mass–“for a giggle”. Naturally they have it at the church (now abandoned) and naturally revive Dracula. It’s a good thing a descendant of van Helsing is around…but Dracula goes after his niece (Stephanie Beacham) in revenge.

Lee and Cushing are great as always in their roles and whenever they’re on screen the movie gets a much-needed shot of energy. The opening and ending battles are the highlights of the film (although the ending is spoiled a lot by playing lousy 70s music). Also the main ringleader of the kids is named Johnny Alucard (Christopher Neame)–a truly stupid name that dates back to the 1940s. The film also has scream queen Caroline Munro looking absolutely great. The film is well-directed and pretty well-acted but the plot is stupid, the constant barrage of 70s fashion, dialogue and music gets annoying real quick and I was basically bored silly.

Most Hammer fans agree–this was one of the worst Dracula movies–it’s followup (Satantic Rites of Dracula) was THE worst–and the last Hammer Dracula film. This gets a 2–just for Cushing and Lee.