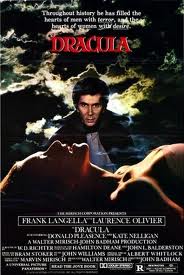 Romantic version of Dracula based on the 1970s play. Dracula (Frank Langella) arrives in England and immediately sets his sight on Mina van Helsing (Jan Francis) kills her and turns her into a vampire. Next he goes after Lucy Seward (Kate Nelligan) but her father Dr. Jack Seward (Donald Pleasance) and van Helsing (Laurence Olivier) try to stop him…

As you can see the original novel has been changed drastically, but (unlike Coppola’s 1992 dreadful movie) this doesn’t claim to be a faithful version so I have no problem with the changes. Jonanthan Harker is hardly in this and Renfield seems added for no good reason. The story moves quickly, there’s next to no blood (how this got an R rating is beyond me) and (in its original version) it looked beautiful. I saw this in a theatre twice in 1979–with the exception of one scene (when you see Mina as a vampire) this really didn’t scare me but I loved the way it looked. Langella plays Dracula as a romantic figure. He’s tall, handsome and the seduction scenes with Francis and Nelligan are incredibly erotic. Also he (wisely) chose not to wear fangs. The settings were also very colourful and the film was beautifully atmospheric. Unfortunately it isn’t that way anymore.

Director John Badham stupidly has changed this movie. Thanks to advanced digital technology he has “drained” the colour from the entire movie. According to him it looks better this way and all prints, at this moment, are drained. He’s dead wrong. The loss of colour makes the film drab and dreary and actually destroys the mood the original had. Everything looks terrible and the beautiful production design is lost. Also when we see Mina as a vampire her eyes were glowing red. Now they’re just white–it looks pretty stupid. Badham made a terrible mistake–hopefully one day the original version will be shown.

Acting–Langella is excellent as Dracula. Very sexy and also good when he has to be violent. Francis is OK but hardly in the movie. Pleasance has next to nothing to do but is OK. Nelligan is just great and matches Langella in acting. Olivier is just horrible as van Helsing. He later said he just did it for the money–it shows. John Williams’ thundering score is a definite plus.

All in all it USED to be a good film but this drained version is really lacking. Still it’s worth a look just for Langella and Nelligan alone.