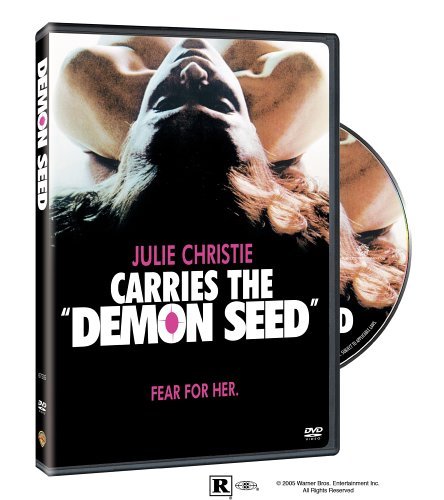 Artificial Intelligence Terrorism,
Demon Seed is a solid, independent science fiction thriller, regretfully overshadowed by the tragic fade of its director Donald Cammell. He was a devoted filmmaker who never really could depend on much support from both critics and distributors. His career started in a minor key, with `Performance’ suffering from a lot of re-editing. Similar problems with his last film `Wild Side’ drove him into committing suicide.
Don’t let the technical mumbo-jumbo at the beginning of `Demon Seed’ trick you…The first half hour leads you to believe this film is a theoretical suspense-thriller but in fact, the premise is more simple and appealing to a wider audience.

`Proteus’ is the name of a super computer, designed by scientist Alex Harris, in order to help him with his research. Yet, Proteus is so smart he soon develops an own will. Continuously growing stronger, Proteus perpetrates Alex’s house and keeps his wife as a hostage. Proteus’s goal is to impregnate Suzan (Julie Chrisie)…

Proteus is like a feared computer-virus in a pre-internet era! A super computer thinking & handling for itself! Which is, according to me, a very successful horror formula. The absence of a villain in the shape of a man helps increasing the tension. The setting of the over-protected house is great and causes uncomfortable feelings of claustrophobia.

Julie Christie (the female star of `Don’t Look Now’) is great and almost carries the entire film. The visual effects in `Demon Seed’ may look a bit dated by now, but the film still contains one of the greatest decapitations ever and…an outstanding ending! I swear to you…if you thought the whole movie was only so-so, the last 5 minutes will make you think more highly of it.