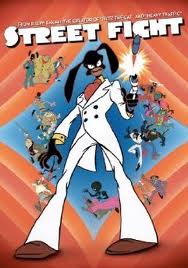 Streetfight (aka Coonskin) is a very unique film directed by animation pioneer Ralph Bakshi. It is an oddity of the cinema, and is very much worth seeing. It is live action mixed with animation, seemingly influenced on Disney’s legendary Song of the South, almost as if it is a response to that flick. Philip Michael Thomas, later to become Don Johnson’s sidekick on Miami Vice, and Scatman Crothers, most famous for his role in Kubrick’s The Shining, are prison escapees.

Charles Gordone and Barry White (yes, that Barry White) are Thomas’ friends and plan to help him escape prison. They are stuck at a police roadblock, and Crothers tells Thomas a story about a black rabbit, a bear, and a fox who move from the South to Harlem in order to find a more peaceful existence.

The story is animated, and provides a lot of wonderous things to see. Like all of Bakshi’s films, most will be annoyed and will dislike the animation. True animation lovers will forgive its clunkiness and fall in love with its inventiveness. The movie is very violent, very sexual, and it is mostly about battles between the races.

For a long time, I thought I was watching something extremely important, but after a while, especially after I got done watching it, it started to seem more like a run-of-the-mill blacksploitation flick, along the lines of Superfly. It’s very sloppy and doesn’t really say anything. Besides, isn’t Bakshi white?

Whatever the answer to that, Coonskin/Streetfight is still very much worth watching for animation aficionados as well as cult movie fans. 7/10.