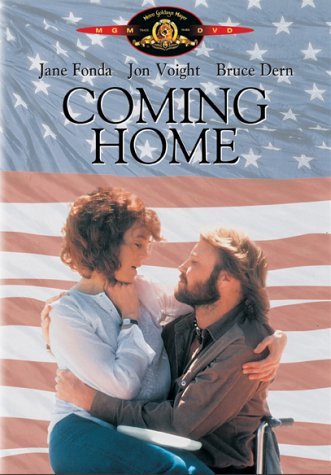 The reason I don’t like COMING HOME is because it feels like it was directed by someone who has spent a long time working on TVMs , there’s a never ending soundtrack of pop music in the background ( Now I know where Jerry Bruckheimer stole the idea ) and there’s little in the way of character arc . When we’re presented by the characters at the start of the movie they’re still basically the same people by the end of it . Luke Martin may find a focus for his bitterness and anger by the end but compare him with Ron Kovic with BORN ON THE FOURTH OF JULY to really see what I’m getting it.

There are good points and it’s all to do with the cast . Jane Fonda probably deserved her Oscar for best actress while Jon Voight certainly deserved his . It’s also interesting to note that Bruce Dern and Robert Ginty play roles in which their characters are sent to the ‘Nam as both these actors would later be typecast as psycho Vietnam vets . And I will praise the fact that COMING HOME is far more successful in showing the pain and anguish on the home front far better than WE WERE SOLDIERS.

But I still have to stick with instinct that it’s far from a great movie and benefits from being released before several other Vietnam War dramas .

Really bad, to tell you the truth,

Probably the most dated of the Vietnam movies of the late 1970s. It’s loaded to the brim with every cliché one can think of. The actors are all at least adequate, with Bruce Dern being the most successful. The whole thing might work a ton better if it weren’t for the execrable pop music score. I mean, the songs are good, of course, but they’re used so poorly. For example, the morning when Dern is shipping off to Vietnam, the lyrics to the song that begins are “it was a time of innocence.”

I’m disappointed in Ashby. By no means is he a great director, but he made some great movies. He really tries to tug at your heart strings. After one character dies, Ashby closes the next scene by tightening the camera on his guitar because, you know, we have to be told what to feel or we won’t feel it. I think that the love triangle plot is quite good, but, despite a pretty good climactic scene, the ending is just awful.

They kill off the husband, and leave Fonda alone for Voight. I think that’s morally lazy, skirting the emotional complexities. Skip this and see The Deer Hunter instead. Despite some of the deserved flack that it has gotten in recent years, it’s very well made. At the very least, it beats the heck out of Coming Home.