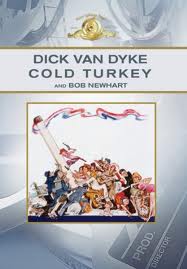 A tobacco company gives out an announcement–they will give 25 million dollars to any town where everybody stops smoking for 30 days. They figure no town can do this and it will give their company free publicity. The pastor (Dick van Dyke) of a VERY small town called Eagle Rock convinces the townspeople that they need the money and can stop smoking. Will they make it?

I saw this as a kid (I was 9) at a Saturday matinée with a theatre full of kids my age. We hated it! I remembered the movie and the message but when you’re 9 you want action and adventure. We were bored and restless.

Seeing it again over 30 years later I like it a lot. It’s not a film for kids but a satire for adults. The movie is actually pretty funny (seeing everybody trying to give up smoking is great) and the cast is fantastic. I was never a fan of van Dyke but I must admit he was very good in this movie. His character is not perfect–he’s somewhat cold and cynical (especially to his wife) and van Dyke pulls it off. Barnard Hughes is hysterical as a doctor who almost goes crazy trying to give up smoking. It’s also fun seeing Jean Stapleton in a (somewhat) serious role and using her normal voice. And Bob Newhart is amusing as a tobacco company executive.

Some of the comedy doesn’t work–the jokes about Walter Cronk (obviously doing Walter Cronkite) will go over the heads of younger viewers and I could have lived without the little old lady swearing (quite a bit for a PG film). I also found the ending VERY depressing (but that’s sort of the point) and the fate of three characters is left up in the air. This bombed in its initial release but it was probably a little too strong for its time–I think it plays very well today. Worth catching.