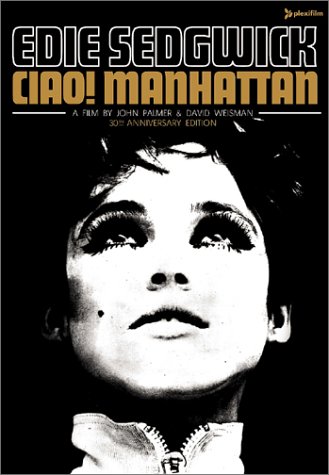 Strange, hypnotic, and somehow quite affecting,

Ciao! Manhattan is an avant-garde film that makes the films of Jean-Luc Godard seem conventional. That’s not to attack Godard, mind you. I’m just comparing the two to express how far out Ciao! Manhattan is. The slight narrative concerns a young Texan hippie traveling the American countryside just because he likes to see things.

One night, he sees something quite unexpected: a beautiful young woman with bare breasts hitchhiking. He picks her up (who wouldn’t?) and finds that she has a couple of dog tags around her neck with her name, Susan, and address on them. He takes her home. Susan’s mother thanks him and offers him a job taking care of her daughter. Susan was a young model in New York, a discovery of artist Andy Warhol. She lived a life of hard partying, and is now paying for it with a severe case of brain damage. Now Susan lives in a drained pool in her mother’s back yard, and she spends endless hours drinking hard liquor and rattling off stories about the old days in New York.

At first, Ciao! Manhattan just seemed to me an excessively playful experimental film with a bunch of bizarre imagery and editing and stuff. I was laughing, it was fun to see the excesses of that sub-culture which I know so little about. But after a while, the film just started working, and really well. Susan is played by Edie Sedgwick, who really was a protege model of Andy Warhol. The film works a fine balance between reality and fiction. How much of Sedgwick are we seeing? Is any of it fictional. She died three months before the film was released, and, edited into the last moments of the film, there is a shot of a newspaper headline that announces the death. Whether Ciao! Manhattan was meant to be or not, it serves as a dirge, not only to Edie Sedgwick, but to the young generation of the time.

I don’t know, maybe I loved this film because I grew to adulthood so far after the hippie generation, but I’ll tell you one thing: I have seen a ton of the greatest films ever made. It’s a rare experience to come upon one that is as unique as this one. Perhaps there were a thousand films like this at the time, but none are available except this. Well, I choose to praise this. 10/10.