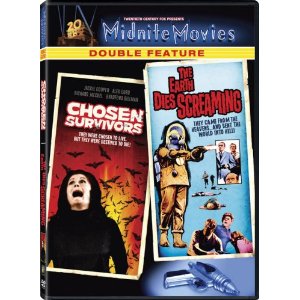 It’s the eve of nuclear war and a government computer has selected a specialist group of people to live 1,758 feet underground in a nuclear proof, purpose built housing facility. The purpose is that these people can start to repopulate the Earth in five years time. However, something isn’t quite right about this set-up and things take a distinctive turn for the worse when it’s revealed that a colony of vampire bats have also made the facility their home.

It’s far better than any plot synopsis suggests. True, it’s very 70s, both in characters (clothing/delivery of dialogue/hair), and the effects used, but it also captures the zeitgeist of paranoia running at the time. Fear of nuclear war and the government hangs heavy, while the group dynamic under a stress situation makes for a tellingly oppressive mood. The whole thing has a bleakness about it, and that’s before the vampire bats turn up hungry for what is apparently the only source of blood left available to them. The downbeat feel is further enforced by Karlin’s music score, which often sounds like the synthesiser strains favoured by John Carpenter for some of his well revered culters. There’s the expected bad turn of events with some of the characters, I mean it would be a dull film if everyone just got on all hunky dory, while there’s a wicked twist that propels the narrative to another level of enjoyment for the viewer.

Competently acted by the cast, and effectively put together by Roley, Chosen Survivors is a neat horror/sci-fi hybrid. Not without some cheese and gaps in plotting for sure, but very effective and recommended on proviso you aren’t looking to be cheered up! 7/10