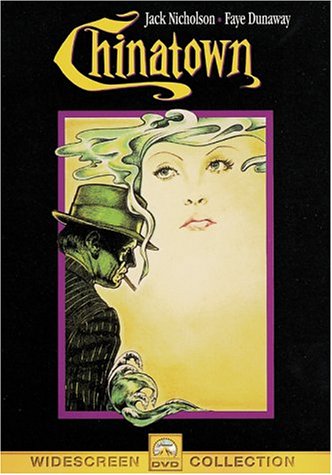 Chinatown (1974)
As cooly intense and exceptionally-staged as any detective story/film-noir of the 40’s & 50’s,

Chinatown is a tremendous collaborative effort that produced one of the most memorable Hollywood pictures of the 1970’s. Director Roman Polanski (his last film in America, and the first he made in America after the murder of Sharon Tate), stars Jack Nicholson & Faye Dunaway, and writer Robert Towne, all come together to create a detective story classic. At times it slows its pace down so the viewer can think along with Nicholson’s character, to take in the environment as well as the situation he’s in (i.e. when he goes to the empty reservoir, when he visits Noah Crosses house the first time). And the script has the perfect sense of drawing us into a story, fueled by curiosity, grit, and cynicism, and engages the viewer by its realistic dialog between the characters.
J.J. Gittes (Nicholson, in one of his best 70’s performances) is in Los Angeles circa 1933 in the line of private investigator, usually dealing with people who may or may not believe that their significant other is having an affair. Evelyn Mulwray feels this may be the case with her husband Hollis, and Gittes decides to take the case. However, this draws him into a deeper case involving the city’s loss of water once Hollis- a major player in the water supply controversy in the city- is found murdered. This eventually leads him to Noah Cross (John Huston), a big businessman and who also happens to be Evelyn’s father. Intrigue starts to develop, as Jake’s own life begins to be at risk.

As a intricate, detailed detective story the film is an above-average work, with Towne’s script containing the maturity, and wicked sense of humor, of a James M. Cain or Raymond Chandler novel. When the thrills come they come as being striking. And when humanity and compassion get thrown into the mix, the film reaches a whole other plane of intelligence. The last third of the film could turn off some of the audience (depending on one’s own level of belief), but it holds strong thanks to the performances. Nicholson doesn’t over-step his bounds in any scene, finding the right notes in suggestive conversations. Dunaway is better than expected (though I’m not sure if it’s an great performance). And Huston’s Noah Cross is one of the more disturbing villains of that period in movies. Add to it some good cameos (Burt Young as a driver, Polanski playing the little guy in the infamous ‘knife’ scene), and a smooth soundtrack by Jerry Goldsmith, Chinatown comes out as strong piece of moviemaking, and arguably one of the greatest in the crime/mystery genre. A+