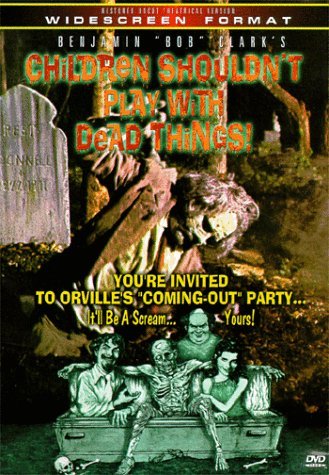 Maybe not the biggest classic in the zombie field but very underrated and, without a doubt, THE gem with the coolest title in horror history (closely followed by “Let Sleeping Corpses Lie). This film is a must for collectors of rare films!

Biggest letdown about it is that it starts out really slow on the verge of dull, even. The plot also is fairly familiar and introduces a group of young people (eccentric ones, since they cherish artistic ambitions) on an island determined to have innocent fun. They’re desperately trying to resurrect the dead, but when it actually happens they can’t handle it of course. They fool around with corpses and play stupid pranks until the dead finally decide they’ve had enough of the kids’ disrespectful behaviour. They rise from their tombs (which provides the film with one of the most well-elaborated and eerie sequences in zombie history) and hunt down the kids.

If you have the patience to struggle through the first hour and the more or less uninteresting character-drawings, you’ll be rewarded with another half an hour of pure fun and imaginative cruelty. The make-up effects are pretty spooky considering the time it was shot, by the way. The light-headed tone covers up the obvious “Night of the Living Dead” influences but, still, the film could have used a little less talking and more action.