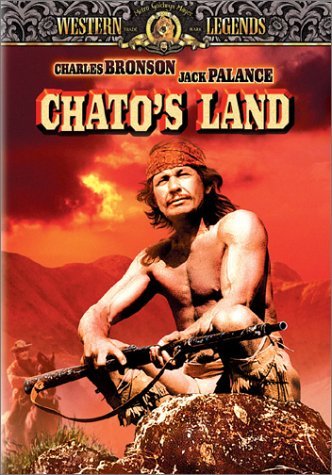 Go then, and God mark you for the man you are
Chato’s Land is directed by Michael Winner and written by Gerry Wilson. It stars Charles Bronson, Jack Palance, James Whitmore, Simon Oakland, Richard Baseheart, Ralph Waite and Richard Jordan. Shot on location in Andalucia, Spain, with photography by Robert Paynter, it’s musically scored by Jerry Fielding. Plot finds Bronson as half Apache, Pardon Chato, who is forced to kill the local sheriff in self defence and finds himself being hunted by a town posse led by Captain Quicey Whitmore (Palance). However, as the posse trail him into the wilderness it becomes apparent that the tables have been turned, with Chato given further cause to inflict harm upon his pursuers.

The first of six collaborations between Charles Bronson and Michael Winner, Chato’s Land finds the pair setting the marker for what would define their work. With the Western genre going thru a resurgence, Chato’s Land is very in-keeping with the type of Western that was being released in the early 70’s: namely violent, uncompromising and certainly gritty. These things, as history now shows, were tailor made for Winner, who perfectly utilises Bronson’s silent and brooding assets to great effect.

Often suspected to be an allegory of the United States’ involvement in Vietnam, it’s thematically correct in that respect. But the timing of the film would suggest this to not be the case. Chato’s Land is more than just a revenge Western; a film about white men out of their usual terrain being pursued by a man of a different ethnicity, it wants to, and does quite well, be a picture dealing in racism, violence and the folly of hypocritical justice. But even tho Wilson’s script brings these issues to light, they are not fully formed, with Winner at times dragging the film to a stand-still. However, the group dynamic is a good one, with the inevitable character differences creating a tinderbox waiting to ignite, while Winner doesn’t skimp over the violence, puncturing the narrative with savage thrusts.

Bronson was 50 years old when making the film, his physicality here is very impressive. The role of Chato is hardly a stretch for him, in fact it’s very much a perfect fit. He’s basically asked to be a phantom in the landscape, but he casts an imposing presence each time he’s called on to deliver some Chato justice. In pursuit are a mixed bunch of actors, with Palance, Whitmore and Baseheart the obvious professional standouts, while Simon Oakland leaves an indelible mark as grizzled father of the Hooker boys, Jubal. Fielding’s (The Wild Bunch) score is efficient, but workmanlike, and Paynter’s (Lawman) photography never really makes the landscape as imposing as it should be. Overall it’s a mixed bag, but for fans of revenge type Westerns, and Palance, it’s easy to recommend, but it still should have been more intelligent than it ultimately is. 7/10

Chato’s Land (1972)
Fairly Good For A Winner Film,
CHATO`S LAND was shown alongside DEATH WISH on BBC1 tonight as a tribute to the late Charles Bronson . To be honest this isn`t much of a tribute down to the simple fact that Bronson has very little dialogue and only a few scenes in a film that concentrates more on the posse than their pray . A far better tribute would have been that Bronson movie that contains the classic line ” Put down those melons ”

On its own merits CHATO`S LAND is a fairly entertaining and intelligent film featuring a ( White ) posse on the trail of an ( Apache ) fugitive . It`s one of those Vietnam allegories as seen in TOO LATE THE HERO , ULZANA`S RAID and THE CRAZIES . Don`t believe me ? , well check out the scenes with the Mexican being the surrogate South Vietnamese and Ezra Meade a metaphor for the anti war movement and just to hit the audience over the head with the point there`s a sequence of a village being burned to the ground.

Michael Winner is hardly the greatest film maker who`s ever lived (Check out the very obvious day for night filming) but he does deserve some credit for casting someone who actually looks like an Indian in the title role and it`s not often you see a couple of Scottish characters in a western who give a very, very accurate description of rain soaked Greenock