Charley Varrick – 1973
When he runs out of dumb luck he always has genius to fall back on! 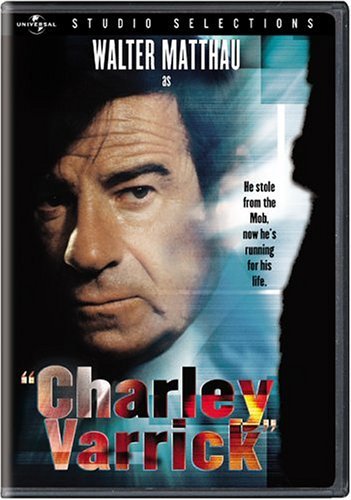 I`m Sure Quentin Tarantino Has Seen This,

Did someone say this was written for Clint Eastwood in the title role rather than Walter Matthau? This would explain how Charley has a couple of sidekicks half his age and how he has a distasteful scene of going to bed with someone young enough to be his daughter. Hey wait a minute if Eastwood had been cast would they have left in that line about ” I figured you weren’t Clint Eastwood “? As for the rest of the cast Joe Don Baker is memorable as a really evil hit man, John Vernon plays the most laid back mobster I think I’ve ever seen in a movie while Andrew Robinson is slightly disappointing after his show stopping appearance in DIRTY HARRY but it’s amazing to think his only notable role after this movie is in HELLRAISER some fourteen years later

CHARLEY VARRICK is a very clever and totally amoral thriller. It’s the sort of film Quentin Tarantino wants to make but he doesn’t have the economy of skill to do so, and I couldn’t help noticing there’s a line of dialogue about ” A blow torch and a pair of pliers ” that seems to have been reused in PULP FICTION.

entertaining, for the most part,

Charley Varrick is a pretty good heist film. There are a lot of cliches, but there are even more original twists and turns. If you are a fan of the genre, then you will certainly like it. If you are not, then you will not. I myself don’t care either way, and I just barely ended up liking it.

The only thing about the film that is particularly painful is the fact that Walter Matthau gets laid by a 20 year old woman. He is not the looker, and the sex scene is so ridiculous that they should have thought twice about filming it at all. It halts the picture in its tracks. Many will probably have to exit the room and vomit.