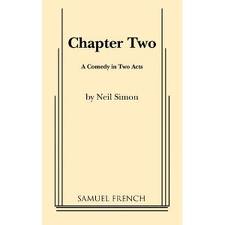 Autobiographical comedy/drama by Neil Simon. In it a recent widower George Schneider (James Caan) meets and falls in love with a recent divorcee Jennie MacLaine (Marsha Mason). He marries her quickly, but realizes he hasn’t gotten completely over his first wife. Is her love for him enough to see them through?

This was based on the real troubles Simon had when he married Mason in the early 1970s. He got over them (not completely though–they divorced in 1981) and wrote “Chapter Two” for the stage. I never saw it on the stage but I remember seeing this movie up the theatre back in 1980. I loved it (with reservations) back then and I still love it (with reservations) now.

The dialogue is virtual non-stop one-liners–real people don’t talk like that but it is fun and entertaining to listen to. The dramatic sequences work well especially with Mason giving her all to what must have been a very difficult role for her to play. She’s just tremendous (and drop-dead gorgeous) and was understandably nominated for an Academy Award for Best Actress for this role (she lost to Sally Field for “Norma Rae”). The film looks beautiful, moves fairly quickly and there’s nice strong support from Joseph Bologna and (especially) Valerie Harper…but there’s one big problem. James Caan. He’s a wonderful DRAMATIC actor…NOT comedic. He seems very uncomfortable playing a mild-mannered grieving man, and the poor guy has no comedic timing and doesn’t know how to tell a joke–most of his lines fall flat.

With a better leading man I might have given it a 10. As it is this is a strong 9. Worth catching…especially for Mason.