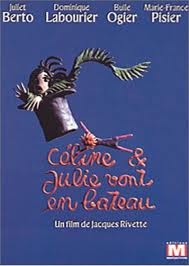 What an indescribably bizarre film this is. I couldn’t relate the plot to you who read this. There really isn’t one. Only at the very end of the film did I recognize a bit of Alice’s Adventures in Wonderland as being a framework. That novel is mentioned once or twice during the film, but only the last scene rang a bell in my mind. Otherwise, this film is comprised of a lot of random and only peripherally connected sequences involving the two main characters, who are lesbian lovers, apparently.

The film is three hours and nineteen minutes long. The available VHS is split into two tapes, of course. The first tape, about two and a quarter hours long, didn’t seem to have any internal structure. I very well might just have missed it. But, anyhow, these early and middle sequences are all interesting, some better than others, but they never seem to equal anything.

The second tape, however, being a little more than an hour long, is much more coherent, as far as that word can be used to describe anything in this film. Eh, it’s really pointless to try to figure this film out. My final assessment is this: it is a very interesting film, but often far too slow and definitely far too long. Too much of it is incoherent, and the characters are unreal, as they are meant to be, but you can’t really attach yourself to anything in the film. It’s easy to grow bored of it.

I like a ton of New Wave films more than this one. However, it is rare that a film beckons me to view it again. Like I said, this is a three hour and nineteen minute long film. When I feel not only the need but also the desire to rewatch it, that has to be taken as some sort of endorsement. 7/10 for now.

P.S. Although I did not get a chance to watch it again, I know I will come back to it someday…