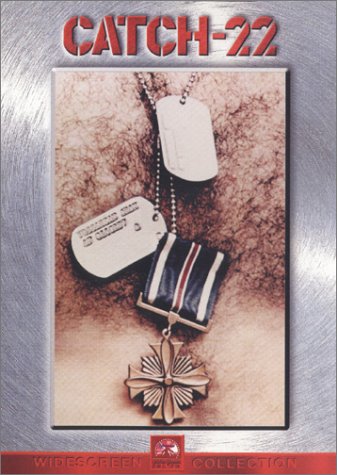 It’s Let Down By The Acting Style,
I’ve just returned from the user comments page on DOCTOR WHO ( 2005 ) which is a comparable page with this one on the film adaptation of Heller’s CATCH 22 . Some people detest everything about the new version of the sci-fi show while some people can forgive the flaws since it’s not meant to be a carbon copy clone of the 1963-89 show . And so it’s the same with this film version . Some people obviously detest this Hollywood version of the anti war black comedy while some people can forgive the flaws.

I for one have never read the acclaimed novel so I’m only judging the film on its own merits ( Interesting though in no way a shock to realise that the movie’s most vocal critics are fans of the book ) but the one thing that is unlikable about the celluloid version of CATCH 22 is the acting style – It’s overblown and cartoonish , comical and surreal . In fact it’s like watching a live version cartoon a sort of WAIT TILL YOUR FATHER GETS HOME or THE SIMPSONS with battle scenes . Notice too that I didn’t say ” acting ” but ” acting style ” I’m not really blaming the cast but the director Mike Nichols for this . The whole movie would have worked better if the comic characters had been played more straight while the serious characters had played up to the comic elements a bit more . As it is only Art Garfunkel’s performance as Captain Nately seems suited to his character as is to a slightly lesser degree Jon Voight’s Minderbender . Unfortunately everyone else in the cast seem confused as to how to approach their characters.

Despite this flaw I can certainly understand where film got its reputation from . This is unrepentant cynicism about war . Imagine you’d departed as a draftee to Vietnam in 1969 with the last war film you’d seen at the cinema being THE GREEN BERETS and the next war movie you’d seen at the cinema being CATCH 22 . How the world in general and cinema in particular must have changed to the individual . As I previously said the directing is very heavy handed but in amongst there are very memorable scenes amongst the comic strip performances like Minderbender explaining a scam to his CO as a plane lies exploding on the runway or the final shocking scene involving Snowdon . Scenes like this stop the movie from being the disaster some people report it as . But the acting style stops it from also being the masterpiece some people claim it is

Misses The Point,
Based on the incredibly popular novel by Joseph Heller, sporting Mike Nichols as director, and featuring a first rate cast that included a host of brilliant actors, CATCH-22 was one of the most highly anticipated films of its year. And it proved one of the most critically-despised box office disasters of the early 1970s. Almost every one loathed everything about it.

The story concerns a group of WWII bomber crews and support staff stationed on an island off the coast of Italy, on which they make bomb runs–but this is merely the peg on which Heller hung his savage satire on American bureaucracy. The film version, sadly, keeps the peg but manages to miss the rest.
Part of the problem here is that the humor of the novel is deeply tied into the way in which Heller tells his story–and it simply doesn’t translate well into film. That aside, Buck Henry’s adaptation is an absolute disaster: instead of rapid-fire, it is slow-crawl, and instead of sharp-fanged it is gap-toothed.

Mike Nichol’s direction is an equal miscalculation, for he approaches the material with an odd sense of detachment that effectively kills even the little bit that Henry’s script had going for it to begin with.
Given all of this, the surprising thing about the movie is how well-cast it is and how good some of the performances are. You simply couldn’t ask for a better Yossarian than Alan Arkin and the novel’s Doc Daneeka might have been written with Jack Gilford in mind; Richard Benjamin, Art Garfunkle, Paula Prentiss, Bob Newhart, and even Orson Wells are among the many who give the film what little force it has. But ultimately, even the best performances in the film can’t get the show off the ground. It is dead on arrival.

The film is presently available on DVD, but the DVD package isn’t anything to write home about; the film is well presented, but the commentary track is merely so-so and the rest of the bonuses are ho-hum. Although not, mercifully, as ho-hum as the extremely misguided film itself.