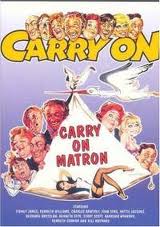 Carry On Matron (1972)
:-
Running On Empty,
CARRY ON MATRON was released in 1972 and it’s becoming clear that the series has reached a natural end with the best entries like CLEO , UP THE KYBER and SCREAMING being from the mid to late 60s.

In itself MATRON is by no means bad it’s just that we’ve seen it all before with a thin plot ( A bunch of spivs trying to break into a hospital to steal a supply of contraceptive pills which they plan to sell to third world countries ) surrounded by gags of a slightly amusing though unsophisticated nature . I think that’s where the problem lies – The gags aren’t all that amusing with the unsophisticated nature starting to show its age . Did we need another movie that uses a man dressed up as a woman in order to drive the plot ?

Perhaps the worst criticism I can make is that I saw CARRY ON MATRON this afternoon , less that twelve hours ago and I have a problem in trying to remember a very funny line . That’s a serious problem for a comedy