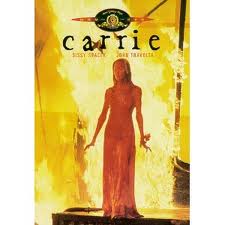 Show her that if she had remained sinless, this curse of blood would never have come on her!
Carrie is directed by Brian De Palma and adapted by Lawrence D. Cohen from the debut novel of the name written by Stephen King. It stars Sissy Spacek, Piper Laurie, Betty Buckley, Amy Irving, William Katt, Nancy Allen & John Travolta. Pino Donaggio scores the music and Mario Tosi is the cinematographer.

Carrie White (Spacek) is the outsider at school, dominated at home by her fanatically religious mother (Laurie), Carrie is unmercifully teased by her class mates when she reacts with terror to her first menstrual period. When Miss Collins (Buckley) the teacher decides to punish the girls for their actions, it sets the wheels in motion for Carrie to unearth telekinetic powers that could spell devastation for anyone close to her.

As pretty much everyone on the DVD documentaries says, nobody involved with making Carrie had any idea it would become the much loved classic that it is. Made for $1.8 million, it made almost $34 million domestically alone. Garnering award nominations, something of a rarity for horror movies, it also stands proud as one of the most influential movies in the horror genre. Be it the wave after wave of High School based horrors that would follow, or the now standard use of the unexpected jolt, Carrie has earned its place on any best of horror list. Not bad considering both De Palma and King don’t feel it’s necessarily a horror film! But that’s for discussion elsewhere me thinks.

De Palma astutely grabs us from the off, after we are quickly introduced to Carrie White on the volleyball court, where she subsequently loses the game for her side, we shift to the locker room and Carrie takes a shower. Cut to slow motion as the girls lark and pamper themselves in various forms of undress. Shot in steam based soft focus by Tosi as Donaggio’s score swirls with playful emotion. Then BAM! Having lulled us in to a false sense of security De Palma brings the blood, menstrual blood. It’s an attention grabber alright and it’s a testament to how great Carrie is that the attention is held right to that jolting finale. Blood, as those who have seen it know, is pivotal to Carrie’s structure, from the shower room to prom night, and on to a bit of a family tete a tete. Not a horror film my eye Brian & Stephen.

For those who wish to delve into sub-texts, meanings and motives etc, Carrie’s a good film for those of that mind. But again, that’s for discussion elsewhere. I just love to view Carrie as a sharp story told exceptionally well, a movie that manages to pull my emotions in a number of directions. Anger, love, sympathy, revulsion and even a wave of guilty triumphalism, it’s all there as De Palma crafts what is arguably his masterpiece. Spacek represents one of the best casting decisions of the 70s, the ugly beauty thing is down pat and the vulnerability extraordinary. Laurie brings the real monster of the piece, religion gone berserker; so brilliantly essayed. The young cast shine bright, notably Nancy Allen, while Donaggio’s score is to die for: resplendent with Herrmannesque string stabs.

Carrie may look dated now, but its ability to shock and trouble the cranium still exists on revisits. A masterful piece of film making, where even the use of split screens avoids charges of gimmickry. If only more King adaptations to the screen could be like this. 9/10

One of DePalma’s best,

High school misfit Carrie (Sissy Spacek) unleashes her telekinetic fury on her tormentors. This was a huge hit in 1976 and scared me silly. It doesn’t scare me now (except for the closing sequence), but I still think it’s a good solid horror film beautifully handled by Brian De Palma. It moves quickly, has some beautiful imagery (everything is shot soft focus with muted color) and has almost informally good performances. The only bad one is by John Travolta way out of his depth playing a hood.

Amy Irving (as a student who befriends Carrie), William Katt (with a very 70s afro), Nancy Allen (playing a real bitch), Betty Buckley (so young and full of energy) and P.J. Soles (silly but bearable) are all perfect. But Spacek is superb matched by Piper Laurie who is very scary and marvelous as her deranged, religious mother. They were both nominated for Best Supporting Actresses Awards (very unusual for a horror film).

Also the film is (by today’s standards) very restrained in terms of blood and gore. And the final sequence will make you jump (also notice the cars in the background during that–they’re moving backwards!)

Only complaints–De Palma REALLY hates some of the high school kids–you feel like like he’s working out some personal issues here. And did we really need the slow-mo shower sequence at the beginning? Let’s not try to objectify the girls TOO much OK? That aside–this is a great film. See it letter boxed.

Conflicted, but it works
I am usually one who has little problem deciding how I feel about a movie. Carrie is a rare movie that completely conflicts me. A good half of the movie I found excellent. The other half I found execrable. I was highly suspicious right from the second scene, where the camera pans through a high school girls’ locker room in slow motion, and no detail is spared. Okay, so none of the girls in the film were under 25, but that doesn’t take away from the fact that they’re supposed to be 18 and under and we can see their naked breasts and even pubic hair. This is very bothersome.

And then we find the source of the title character’s problems: her religious zealot of a mother, played by Piper Laurie. This role is so poorly written, and so poorly performed that it veers very close to being hugely offensive. Even if not offensive, it’s annoyingly one-dimensional and adds absolutely no depth to the picture. And then there’s the climactic sequence. If you haven’t seen the film, egregious SPOILERS follow. I’ve always known how this film turns out, for the most part (I had never heard about the ultra-religious mother, which is probably wisely kept a secret by the film’s fans).

I expected the whole film to be little more than a revenge fantasy, and I was mostly correct. I especially didn’t like the scene where Travolta and Nancy Allen got killed, despite the fact that I’ve always secretly wanted to see John Travolta die in an exploding car. But it would have been better to let them survive, to allow some of the guilt exist on with them (they had already escaped the prom, so it almost seems like they were supposed to live).

Yet the actual climactic scene in the high school gym is not merely a revenge fantasy. If it were, the audience would be allowed to enjoy the violence and take part in the joy of it, which is the way revenge fantasies generally work. But, no, our emotions are purposely conflicted when Carrie ends up killing several people who neither meant harm to her nor did harm to her. She even kills her gym teacher (Betty Buckley), who is more benign to her than any other character in the film, brutally and intentionally. These deaths were not playing into the audience’s desire, but rather worked against it, raising uncomfortable questions.

Unfortunately, we then have to follow Carrie home. On the way, she kills those who did her, and, consequently, everyone else, the most harm, and that is a death scene we’re meant to revel in. Then she gets to have revenge on the cartoon character of her mother (who speaks with a fake Southern accent because anyone who would be that into Jesus would have to be a Southerner, I guess), where she dies in the same position as Carrie’s demonic-looking Christ figurine, a ham-fisted attempt at satire.

Along the way De Palma foolishly throws in his entire bag of tricks, which don’t really encompass anything that Hitchcock hadn’t perfected years earlier, and perhaps even fall far short of what Hitchcock could achieve, and he has composer Pino Donaggio write what has to be one of the worst musical scores of all time. It frequently steals the sharp violin notes that punctuate Janet Leigh’s death in Psycho, and uses them in an incredibly inept manner, at that.

And then, and then the film has such a remarkably knowing center, the cruelty and pain of a young girl’s existence in high school. Throughout the movie, so many perfect notes are hit, from the embarrassment Carrie feels when her gym teacher, either thinking the girl can’t hear her or forgetting the fact that she can, is telling the principal about Carrie’s period (hey, maybe that’s why she gets crushed at the end!), to the way Carrie refuses Tommy when he first asks her to the prom, to the beautiful spinning dance – not so much the actual dance, which is another of De Palma’s moments of unneeded inventiveness, but the sweet, natural dialogue between Tommy and Carrie.

At that point we don’t know yet that Tommy and his girlfriend, Sue, aren’t in on the prank, but Tommy’s dialogue sounds so unforced that I was unsure of whether he was just an exceptional actor (William Katt does an excellent job in the role) or whether he might actually like Carrie. I found myself actively hoping for the latter and, though we never do find out the exact truth of the matter, I was at least relieved that it wasn’t the former, or at least that the act he was putting on wasn’t an act of unadulterated cruelty (perhaps, at the most, unintentional cruelty).

In the middle of this mess of a film is the beautiful, brilliant, powerful performance by Sissy Spacek. She was a decade or more older than the character she was playing, but she captures that look of a tortured teenage soul with those cavernous, blue eyes and the hangdog lips. And she gives such perfect readings of her lines. Spacek breaks my heart with every word she says in the movie, even during the bad scenes with Piper Laurie. And knowing what awaits Carrie at the prom makes some of the film almost unbearable emotionally. As many problems as I had with the film, I had tears in my eyes through most of it.

Indeed, I was very involved with the film emotionally through its entire run. When, in Sue’s dream sequence in the end of the film, an event occurs that would have been entirely predictable – even if this was the first time it had ever happened (which I doubt anyway), I was startled, badly. I, who claim to recognize nearly every cinematic trick and cliché in the book. And I sat there and chastised myself in my mind for being that gullible. But the simple fact was that it made me jump. That’s higher praise than I can give a good number of the best films.