Capricorn One – 1978
The mission was a sham. The murders were real 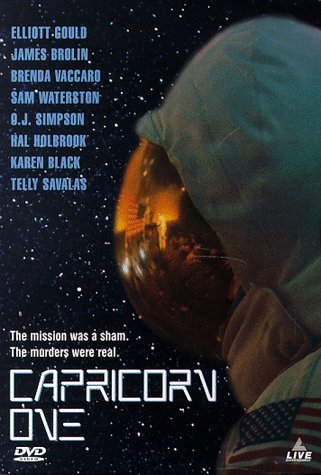 Different From How I Remembered But Very Impressive,
NASA send a manned space mission to Mars but at the very last minute change their minds and ask the astronauts to take part in an elaborate hoax . They agree but a computer error at mission control states their capsule burnt up on re-entry which means they are now dead.

I first saw CAPRICORN ONE in 1982 and was slightly disappointed by it . I was under the impression it was going to have science fiction elements to it but there were none . I saw it again for a second time tonight and was very impressed by it mainly because I knew what it isn’t . It isn’t a sci-fi movie and it’s also important to point out that it isn’t a conspiracy theory thriller either . Can you imagine how the movie would have played out if it was produced today ? It would have shot itself in the foot by bludgeoning the audience to death with a ” trust no one ” message . Gawd I hate conspiracy theories , but not as much as I hate conspiracy theorists , many of whom point to this film saying that if someone can make a movie about a hoax mission to Mars then that proves that the moon landings were faked!

It is true that CAPRICORN ONE will always be remembered as ” That movie about the Mars landing that’s faked in a film studio ” but this is to do it a slight disservice . The one thing I liked about this movie is that it succeeds in doing what must be the hardest thing for a screenwriter to do and that is to create pithy dialogue that sounds natural . Take the scene where the NASA boss catches the Vice President drooling over some spectators butt : ” It’s over there mister vice president . It’s the big long thing on the launching pad . You can’t miss it ” or the later telephone conversation between the same two characters , or take the highly amusing scene where Elliot Gould’s journalist character is given a lecture by his editor . Perhaps the most memorable conversation is the monologue scene where Hal Holbrook’s character laments the lack of endeavor of the present day Americans some of whom phoned up to complain about the I LOVE LUCY re-runs being cancelled because of the moon landings .

The clever dialogue is a joy to behold . Ironically the bit that I remembered the most – The desert escape scenes – from first viewing are the bits I was least impressed with after seeing it again tonight . This down to one simple reason and that’s the lack of dialogue.

Unfortunately there are one or two plot holes that also stopped me from praising the movie as a classic thriller . One is that you are never totally convinced that this type of hoax would ever work in reality . On screen it just seems a couple of NASA people , a couple of feds and two helicopter pilots know what’s going on . Surely the hoax would have comprised of hundreds of people? Would they all be trusted to keep their mouth shut? What about all the radar stations and observatories across the world ? Wouldn’t they have noticed something was wrong when the capsule didn’t re-appear on their radar screens during re-entry. Wouldn’t these spooks destroy all the evidence in case a nosy journalist chanced upon the studio where the fake mission was filmed ? You see it all falls apart when you study the scenario a little too hard , but no doubt there’s a lot of middle aged virgins wearing anoraks jumping up and down pointing out that because the Apollo missions were faked no one making this movie wanted to give away any secrets as to you can fake a space mission.

So if you get the chance to see CAPRICORN ONE just sit back and don’t let your mind work too hard but listen out for the memorable dialogue . Also watch out for the desert scene where the three astronauts find a survival kit and Brubaker decides to give the knife to the astronaut who isn’t played by OJ Simpson