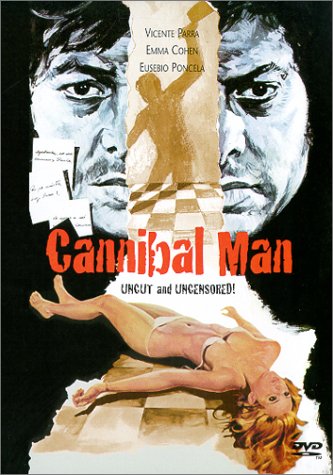 I still haven’t quite figured out what really to think of this film…By no means it’s a mind-blowing thriller or even a memorable eurohorror entry. The film moves by slow and careful…and the plot-development is too tame to keep your solid attention. Heck, even the sex-sequence is shot in a dreadfully tedious way. Yet, do not underestimate this production too much and – whatever you do – don’t be misled by the title that has a traitorous splatter ring to it! Even though `Cannibal Man’ does contain a couple of nasty butchering sequences, it’s merely a drama and an alarming social portrait.

Marcos is a simple man, living on the edge of poverty. He works in a slaughterhouse and has a younger girlfriend. After a night out, Marcus gets into a fight with an unfriendly cabdriver. He accidentally kills him leaves the place of the crime. The girl wants Marcus to confess what he did to the police but Marcus doesn’t want this and sees no other option than to kill her too, before she talks. Later, he kills his brother for not being supportive about it, then his sister-in-law for becoming suspicious etc etc etc… You get the picture: Marcus descents further and further into madness!

I guess the controversial value is the most remarkable thing about `Cannibal Man’. Director Eloy de la Iglesia (not-so) subtly criticizes society’s lack of communication, solidarity and the entire authority & justice system! Bearing in mind the film was made during the reign of the Spanish dictator Franco, this was a risky operation to say the least.