Buck and the Preacher 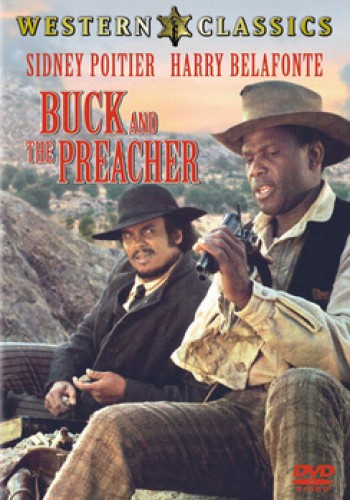 This ain’t Louisiana. Now you walk soft in my town.
Buck and the Preacher is directed by, and stars, Sidney Poitier. It’s written by Ernest Kinoy and Drake Walker and joining Poitier in the cast are Harry Belafonte, Ruby Dee and Cameron Miller. Music is by Benny Carter, with notable contributions from Sonny Terry and Brownie McGhee, and cinematography is by Alex Phillips Jr.

The Civil War was over and by law the slaves were freed. But when the promise of land and freedom was not honoured, many ex-slaves journeyed out of the land of bondage in search of new frontiers where they could be free at last.

They placed their hopes in the hands of the few wagon masters that knew the territories of the West.

None of this came easy, for not only did they have to overcome a hostile wilderness, but night-riders and bounty hunters were hired by “persons unknown” to hunt them down and turn them back to to the fields.

This picture is dedicated to those men, women and children who lie in graves as unmarked as their place in history.

Quite an opening statement that, a real attention grabber, then the throat grabbing ups still further as we land in a camp of African Americans, freed from slavery, ready to travel West for a better life. This harmony is shattered by the arrival of a night-rider gang led by DeShay (Miller), who promptly murder anyone who moves, not even the swine and poultry are spared. As the camp burns and the distaste in the throat refuses to leave, we feel we are in for something special with Poitier’s directing debut, a peek at a part of history rarely shown in the movies.

In some ways it feels like kicking a man when he is down, for Buck and the Preacher is well directed, very well acted, expertly photographed by Phillips (Durango, Mexico and Kenya standing in for Kansas Territory) and features a very untraditional, but pleasing, score by jazz man Carter and blues men Terry & McGhee. But Kinoy (Roots) and Walker have failed Poitier in the writing, badly trying to blend off beat comedy with serious racial thematics, while what little action takes place after that barn storming opening, starts to feel off kilter with the slow pace of the picture.

Such a shame, I mean who better to direct and star in such a thematically potent piece than the graceful Poitier? With Belafonte providing great chemistry as well, whilst gleefully stealing the film from his more illustrious acting brother, there’s still much for the Western fan to feast on here. There’s the unusual but much appreciated sight of the Indians painted as saviours, a dignified and intelligent race riding in cavalry style, the chief (Enrique Lucero) negotiating with Buck (Poitier) like a royal master of his creed. But this ultimately ends up as not being all that it should be.

I’d urge Western fans to see it, but I can’t guarantee you wont be frustrated come the end credits. 6/10