Bluebeard – 1972
Bluebeard loved all his wives passionately… to death! 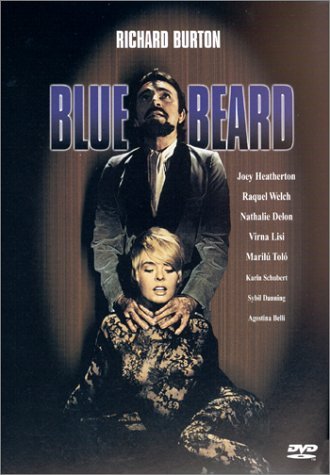 Incoherent version of a great tale,
Ever since I was a child, the morbid tale of Bluebeard intrigued me immensely. But apparently, it’s not very easy to find adequate films about the lady-murdering Baron. I haven’t been able to track down the 1944 version (starring John Carradine!) yet, but I was very happy when I got hold of this one. I figured it couldn’t go wrong with this cast (Richard Burton and Raquel ‘One Million Years B.C.’ Welsh), the period of release (the rancid 70’s) and because it partly is an Italian production (they dare to exceed limits of good taste more easily).

To my regret it turned out a disappointment… Not that it’s an entirely bad seventies film, though. The classic tale is respected and the seventies film implies an interesting structure, but it’s so darn tame! To any creative director or scriptwriter, this plot would offer such a great opportunity to deliver a compelling, adrenalin-filled film but here it’s not the case. It doesn’t even feature the slightest bit of sleaze, which I actually hoped for. There’s too few excitement and action while the chilling set-pieces are underused. To choice to have Richard Burton play Baron Kurt ‘Bluebeard’ Von Sepper sounded like an ingenious casting idea but his performance only is so so.

For those unfamiliar with the plot: it handles about a German WWI veteran who returns from the war a ladykiller….literally. His eighth wife Anne discovers a secret room in the castle and a horrible secret. The only good comments actually go out to the female cast! One thing you got to admit, Baron Bluebeard has a fine taste and eye for female beauty. Goddess Raquel Welch is great as a nymphomaniac nun and also Sybil Danning, Nathalie Delon and Virni Lisi impress in their roles of ex-wives. Bluebeard is worth a peek if a TV-station would ever program it, definitely not worth buying.