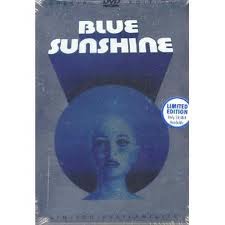 Thriller about a drug called “Blue Sunshine”. It seems a bunch of kids took it in college in 1966. Ten years later it starts to affect them. They have horrible headaches…then all their hair falls out…THEN they become homicidal maniacs! Jerry Zipkin (Zalman King) is unjustly accused of the murders. While on the run from the police him and his girlfriend Alicia (Deborah Winters) try to find out what’s going on. And what does politician Ed Fleming (Mark Goddard) have to do with it?

Interesting premise but this movie does have some problems. King and Winters are just dreadful actors and have zero sexual chemistry between them; some of the dialogue is horrendous (and delivered badly); the plot has huge loopholes and where’s the ending? Still, I did keep watching and found it pretty good.

The plot itself is interesting; there’s some great acting from Goddard and Robert Walden (as a doctor); there are some suspenseful scenes; some very violent (and bloody) murders and lots of nice directorial touches by Jeff Lieberman (love the opening credits!).

This got virtually no release in 1976 and is now (understandably) a cult film. Worth catching.