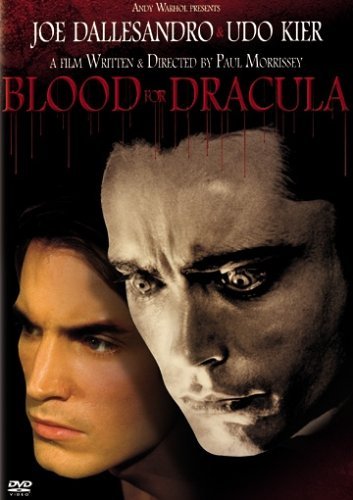 Great, beautiful and artistic …TRASH!,
This very free and rather deranged interpretation of Bram Stoker’s legendary Dracula tale by Paul Morrissey is one of the best independent vampire stories I’ve seen so far. The sheer brilliance of this seventies film completely lies in the characterization of the bloodsucking count. Dracula no longer is a vile and overruling monster here, but a sickly and almost pathetic weakling. He and his assistant (Renfield with brains!) flee from the Romanian castle to settle in rural Italy where families are believed to be particularly religious.

This is essential to the count because he can only feed on virgins’ blood. The count and his assistant are homed by a family with 4 four marriageable daughters, pretending to be wealthy. However, the girls aren’t as ‘pure’ as they’re supposed to be (these cuties like to screw around with the revolutionary servant boy) and the impure blood of the girls only causes to the count to get weaker. Despite of its filthy reputation, this film isn’t that gory or nauseating.

The finale is pretty blood-soaked but the film is overall more absurd and eccentric than it is gore. Blood for Dracula is an outstanding trash-film! The humor is black as the night itself and the substance is essential viewing for every cult cinema admirer. Udo Kier is terrific as the needy count while pretty boy and Morrissey regular Joe Dallesandro has the time of his life portraying the manly skirt-chaser. The budget of Blood for Dracula was low (almost non-existing), yet the set pieces and atmosphere-creating elements are great! The musical score in particular is beautiful and contains a few gripping piano compositions.

In conclusion, Blood for Dracula is outrageous fun and a must-see seventies film for everyone whose tired of the same old unsatisfying horror films. It might not fit for all audiences but I’m sure the more developed genre lovers will love seeing Udo Kier licking a virgin’s blood off the floor. Equally recommended is the Morrissey variant on that other classic tale, Frankenstein. That film is even more extravagant and a whole lot nastier. You can either take that as a recommendation or a warning