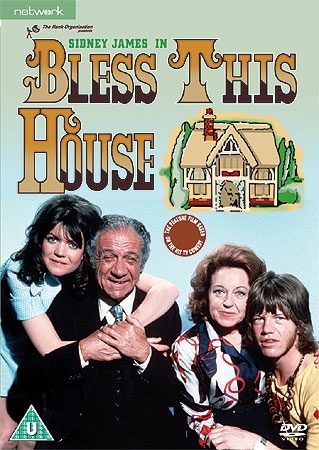 I can’t remember much about the original TV sitcom of BLESS THIS HOUSE except that it starred Sid James as a naughty man called Sid ( With the exception of Hammer’s QUATERMASS 2 has there ever been anything James has appeared in where he doesn’t play a character called Sid ? ) who’s a very similar character he plays in all the CARRY ON movies and that the series was very popular at the time since it was broadcast after CORONATION STREET
This is a film version of the sit com and it’s amazing how many successful ITV Brit coms were produced for cinema release : MAN ABOUT THE HOUSE , ON THE BUSES , LOVE THY NEIGHBOUR etc . Remembering very little about the show I don’t know how it compares
Sid Abbot’s son is getting married to Kate Baines the girl next door who’s father works for the customs and excise , rather inconvient since Sid is brewing brandy in his garden shed .
The problem with the movie is the amount of farce and slapstick that comes into being with people having to hide under tables and getting involved in egg fights . It’s all rather unsophisticated stuff and would probably have been quite dated by the time of its initial release . The early 70s fashion doesn’t help either