Black Christmas – 1974
If this movie doesn’t make your skin crawl… It’s On Too Tight! 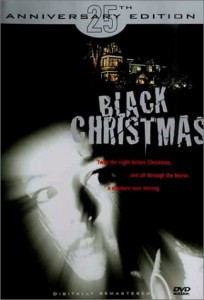 Review by Sven Soetemans
It’s the season to be sadist…fallalalla lala la la!,
Considering the time it was released, this ‘Black Christmas’ must be regarded as a slightly more important seventies film than your average slasher in which gorgeous sorority babes are being exterminated.

Black Christmas is a trendsetter, opening the gates for Michael Myerses and Jason Vorheeses who’ll only be popular several years later. The plot is as simple as it ever was…but here, it’s new and even rather courageous! Lovely looking girls harassed by obscene phone calls and stalked by a familiar killer.

Finally, there still is room for comical undertones and good acting. The eminent John Saxon, but also the beautiful looking Olivia Hussey and Margot Kidder (Lois Lane!!!) Horror fans can’t afford themselves to skip this one. Black Christmas is a modest milestone in the field of scary cinema.

Scares me again and again,
The plot is simple–a crazy man hides in a mostly empty sorority house Christmas Eve. He begins to stalk and kill the remaining girls. This sounds like just another slasher thriller, but it’s not. For starters, it came out 4 years before “Halloween” started the slasher craze and it’s an intelligent, very scary movie–how many slashers can you say that about?

The film was shot in Canada on a low-budget. With the exception of John Saxon, everybody was basically unknown (Margot Kidder made this before “Superman”). There’s no sex, no nudity and very little blood and gore. Still, I’ve seen this movie at least 8 times and it scares me each and every time. All during the movie, even when the characters are inside, you hear the wind blowing through the soundtrack. It makes you feel the cold and chill the characters feel. Also there are the obscene phone calls the girls in the sorority house are getting–they’re deeply disturbing and the frightening music playing during them makes them worse. A truly scary horror film–back in 1978 NBC cancelled a showing of the film–even edited they thought it was too disturbing to air! That should tell you something.

The most terrifying moments in the movie–the phone calls (especially when you hear the killer pleading to be stopped); when Olivia Hussey is grabbed by her hair; the opening murder and Margot Kidder’s murder.

Only complaint–the ending. It was original back in 1974 but it’s an overused cliche now.

A definite must-see. DON’T see it alone. A commercial bomb when released this has deservedly acquired a cult following.