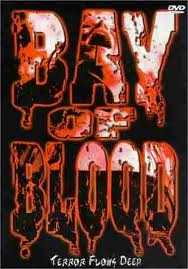 DVD/Video title: Bay of Blood. This was a tough call, but I only gave this a 5. I love horror movies and I love explicit gore but… The film is well-directed by Mario Bava and has a beautiful score. Also the murders are suspenseful and (occasionally) very gory. But there’s a boring plot and LOTS of padding (a girl goes skinny-dipping for no reason; lots of shots of people walking down paths, through houses, through rooms, etc etc etc.) which adds nothing to the film.

Basically it just bides the time between murders. Also the dubbing is atrocious and the acting ranges from OK to unbelievably bad. I need a plot or some good acting to go with the gore–this doesn’t have either. Also Bava once referred to this film as “a piece of s***”. What does that tell you?

Still, it’s historically important as the first slasher/body count film. But what a let-down!