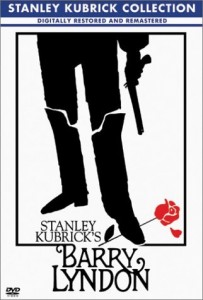 Barry Lyndon (1975)
an excellent, rewarding on multiple viewings kind of masterwork,
Stanley Kubrick’s Barry Lyndon was a seventies film that upon first experience was a little sluggish, and compared to the bizarre nature of many of his other masterpieces (Clockwork Orange, Dr. Strangelove, the Shining) is lacking. But this was years ago, when I perhaps didn’t quite have the patience and attention to underlying emotions the seventies film asks.

Upon a few more viewings up until now, I find that this really is a remarkable, deliberately paced film about a man trying to find the cues and the ways into this upper class world. This man, played convincingly by Ryan O’Neil, is like the total con-man in the guise of the perfect gentleman (in a sense, of course less violently and less ambitious, the character has a little in common with Alex from Clockwork Orange). Aside from the characterizations, which do become richer in multiple viewings, the compositions are truly unique, and ask of a viewer more than most can handle. This is the kind of film that, if nothing else, shows that Kubrick wasn’t only this madman director of these satires and totally visual experiences (which he was terrific at), but also could do a tender, expressive, and period-perfect film about a world that most of us know from looking at paintings in museums, which is precisely what Kubrick was going for.

Deservedly winning of four academy awards (unfortunately not for Kubrick), it also boasts a fine soundtrack of classic works of music.