He sought the ultimate in HUMAN AGONY… with instruments of TORTURE ghastly beyond belief! 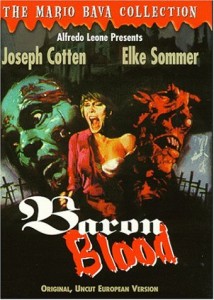 `The Agony of Hell’ …. Terrifically brought to live by Mario Bava!,

This is a brilliant film…I’m getting rather monotonous when reviewing Mario Bava films, but I can’t help it. The man just made nothing but masterpieces and cult-highlights! Perhaps not the most genius film to state Bava’s importance, Baron Blood still remains a stylish gothic wholesome that destroys practically all American horror movies. Baron Blood contains a lot of suspense and a rather fair amount of gore and maniacal slaughters. Other than that, all the usual Bava characteristics are present such as beautiful music, breath-taking locations and top-scenery (Von Kleist’s torture chamber!!!). I just love the basic plot of Baron Blood! The key figure is a bloodthirsty madman, who was cursed to suffer eternally in hell back in the 17th century. A direct ascendant of his found a parchment, containing a formula to bring him back.

Driven by curiosity he and a female architecture student (Elke Sommer – who already worked with Bava in the sublime ‘Lisa and the Devil’) speak the words and true terror is resurrected once more. Innocent inhabitants of the small Austrian town start to die in horrible ways again. Meanwhile, a mysterious and lonely millionaire comes to town and buys the Baron’s castle… Could there be a relation between the dwelling maniac and this man?

There are some serious plot holes in Baron Blood – almost the size of a melon – and the acting performances in this film surely are below standards. The constant screaming of Elke Sommer might become annoying after a while and especially Joseph Cotton disappoints with his uninspired performance. Cotton is best known for his role as Vincent Price’s opponent in `The Abominable Dr. Phibes’. In spite of these few negative aspects, Baron Blood still is a MUST for Italian horror lovers and fans of horror cinema in general. If it were only for the haunting sequence in which Elke Sommer is being chased through the dark and foggy small streets of the village. Like none other, this scene proves that Bava is a master in creating a claustrophobic atmosphere.