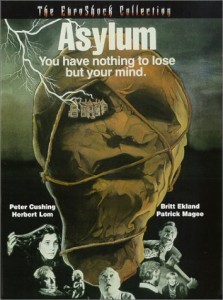 Nowhere Near The Best Anthology Movie,

A lot of people have been praising ASYLUM as one of the best horror anthology horror movies they`ve seen . I must disagree with this popular point of view . It`s by no means the worst anthology movie ( The contenders for that accolade are far too many to speak of here ) ever made but it`s by no means the best when you compare it to THE HOUSE THAT DRIPPED BLOOD or VAULT OF HORROR . I remember seeing this seventies film for the first time as a teenager in the early 1980s and I could remember very , very little about it unlike many of these type of horror films . I guess that should have been a good thing since I watched it on TV last night and couldn`t remember the shock twists . After seeing the entire movie again I now know why I could remember little about it – It`s so forgettable

Story 1 ) As in every other movie of this type there`s a story about an unhappily married couple which always leads to disaster or in the case here murder . I`ve never understood why any of the characters don`t resort to opening a joint bank account with their spouse then do a runner with their bit on the side . The story itself is rather daft and features a major goof of a hand physicaly shoving Ruth`s parceled arm around which is either an editing mistake or a revealing mistake

Story 2 ) Peter Cushing is wasted in a walk on part while the story itself is so silly it has to be seen to be believed . DOCTOR WHO was much better at making showroom dummies come to life

Story 3 ) The screenwriter of ASYLUM is Robert Bloch who also wrote the original novel of PSYCHO . I knew this before I watched the movie and even if I hadn`t I would have been slightly reminded of PSYCHO watching this story . You can work out well in advance how the story ends

Story 4 ) Well I do give some credit to Bloch for making the framing story a story in its own right , but again it falls apart when you think about in any great detail , and can anyone name a movie where a character played by Robert Powell survives to the final credits ?