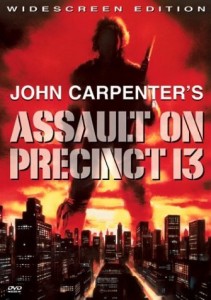 You can say a lot about John Carpenter ….but not that his visions as a director are limited. He’s responsible for milestones in two of my favorite genres of cinema. Horror ( Halloween, the Thing ) and Action ( Assault and Escape from New York ). Carpenter was a multi-talented director around the time this movie was shot. He was a master in creating unique suspense and atmosphere and he was way ahead of his time. The futuristic image his portrays here is exceptional, depressive and disturbing. Therefore, Assault on Precinct 13 is an absolute MUST for action-fans and cult freaks.

The plot of Assault is surprisingly simple. Several characters are introduced briefly and after a certain incident they get united in an abandoned police station. From that moment on, these different types of personalities have to fight for their lives and stick together. They’re kept under siege by violent gang-members who set their mind to slaughtering everybody inside the station. How simple this may sound, it’s a lot more effective than most other far-fetched movies. Carpenter manages to create a claustrophobic atmosphere in his movie that lasts for almost the entire movie ( also thanks to his intense and creepy musical score ). The bad acting is a bit disappointing you have to keep in mind that Carpenter worked with a limited budget and rather inexperienced actors. The little weaknesses in Assault are widely compensated by the explicit violence shown on screen. For several sequences in this seventies film, you need to have a pretty strong stomach…

Especially when watching his most recent films ( like Ghost of Mars and Vampires ) you can’t help wondering what the hell happened to John Carpenter !! He seemed to have lost every bit of his ancient talent. His modern movies are uninspired, pointless and not at all memorable. You can’t go wrong if you stick to his classics…like this one. Highly recommended… Oh, one more thing….Assault on Precinct 13 contains the most brutal and shocking slaughtering sequence I ever saw !! You’ll know which one I’m talking about when you see it. Enjoy !!!

Pretty good early Carpenter flick,
A bunch of people (a cop, 2 criminals and 2 women) are trapped in an abandoned, isolated police station. Outside is a gang that is set on killing all of them.

One of Carpenter’s first films. It’s not really a horror movie–it’s more of a thriller and a Western (it’s a direct homage to “Rio Bravo”). It’s not a great movie–the acting is bad and the dialogue is just horrendous. Also the opening 45 minutes are slow and clumsy. But when the attack begins the movie really kicks.

The attacks are long, violent, exciting and more than a little scary. The gang members are never identified, never speak and are almost never shown–they’re always in shadow or darkness. This makes them all the more frightening. Also he used the idea of the faceless, never seen killer in his next film–a little film called “Halloween”.

The film is worth seeing just to see Carpenter’s direction. Even back then he used the full frame of the movie screen very well (this has to be seen letter boxed) and he composed a very eerie score that fits the film perfectly. Look for a very young Kim Richards who plays a crucial role in the film.

Worth seeing–but no great shakes.