Animal House – 1978
It was the Deltas against the rules… the rules lost! 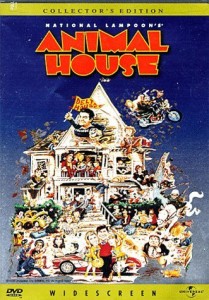 What started it all- and still the best,
This is the best college comedy ever made. Nothing has ever come close to comedic perfection, and never will again. The early bird director John Landis directs this seventies film into greatness bringing stars John Belushi, Tim Matheson, Tom Hulce, Mark Metcalf and Donald Sutherland to the screen in brilliance. True, this seventies film is just about a bunch of misfits defying authority in a campus of 1962, but that’s what makes it so good, and original. Belushi, Metcalf, and others bring many of the laughs here, but it is mainly it’s reputation that brings this seventies film into hilarity. A landmark in cinema comedy. By the way, screenwriters Harold Ramis and Chris Miller originally were going to make this a film about Charles Manson called Laser Orgy Girls, so thank god Douglas Kenney came in and straightened this out to the right part.

Lousy film but, in a way, a classic
1962: Faber College. A fraternity (Delta House) has for years tormented Dean Wormer (John Vernon) by trashing his campus and wrecking havoc with really sick, immature behavior. He finally decides to do everything he can to close them down, but they won’t go out without a fight…

This was a HUGE hit in 1978 (and a hit again when it was rereleased in 1980). I never understood why. The jokes are lame and the humor was, for its time, pretty risque. Nowadays it’s pretty tame (for an R-rated film). Also I saw it in a theatre in 1978 when I was in high school–I didn’t laugh once. Seeing it again over 20 years later it’s even worse. But, this was the first film of its type (the slobs vs. the snobs) and lead to many VERY bad imitators. Compared to those this IS a classic. But still not good.

It has some good things in it. It’s amusing to see then unknown Kevin Bacon so young; Peter Riegert and Karen Allen make a very appealing couple (but their dramatic back story is dull); John Vernon is excellent, and very funny, as Dean Wormer; Tim Matheson is also very good–he nicely underplays his role (and flashes his butt briefly); this made John Belushi a star (he IS funny–sometimes); there’s great direction by John Landis (especially during the “Shout” number); there’s a bombastic Elmer Bernstein score that helps and seeing Tom Hulce and Stephen Furst so young is incredible.

BUT that doesn’t excuse the lousy script; horrible jokes; the sexism; the racism; Donald Sutherland’s pointless and lousy performance and the fact that this film is DULL!!!!!!

I’m giving it a 4…and I’m BEING generous!