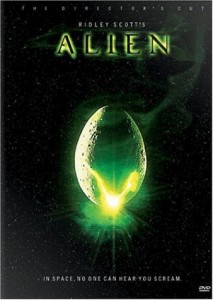 To judge ALIEN against its sequels is to blame Eve for handing Adam that damned Granny Smith! Without Ridley Scott’s masterpiece, there would BE no sequels!

ALIEN is almost 24 years old and stands even now as the benchmark for films of this ilk. Even the fabulously entertaining ALIENS did not (and nor did it TRY) replicate its claustrophobic fear, its style, its inventiveness. Ridley Scott is a one-of-a-kind director. Like Stanley Kubrick (and I do not seek to equate them here) he has an individuality that comes through in his movies and stamps them as being HIS alone. ALIEN, LEGEND, BLADE RUNNER and of course GLADIATOR all bear the mark. The sensitivity, the human angle, the unique (at some point) blue lit filtered backdrop. He is an artiste!
ALIEN has dated very little, evidenced only by the youth of the actors. Can anyone see a similarity (more-so in attitude) between the young Sigourney Weaver and Jane Fonda in her youth?

The bridge of the Nostromo, made up primarily from electronic junk lying around the place was innovative (agreed, “Mother” looks rather old hat, especially with her clunky old DOS interface!) The storyline has been re-hashed so many times since, but in 1979 it was fresh and cutting-edge stuff. The interior of the alien craft with the ‘space jockey’ was a jaw-dropping visual and the barely-glimpsed alien, fear incarnate! Not too many bio-mechanical twin jaw chompers before IT! The ONLY time the alien looked even vaguely suss was when Ripley blasted it out of the airlock. Just for a second one had an impression of the old “man-in-a-suit” routine!

Characterizations were superb, as they were in ALIENS! The demise of Lambert particularly, brings the horror of the alien confrontingly close to the viewer. Electronic sound fx and the musical score serve to heigten suspense at key moments, of which there are several. In the upshot however, the film belongs to Weaver as Ripley (although a young Ian Holm is brilliant as Ash – watch his facial expressions!) a model of constructive thinking, resourcefulness and bravery.

No, they don’t come much better than this!

ALIEN received mixed reviews when it debuted in 1979–largely from science fiction critics, who accused it of being little more than a sort of Friday the 13th in Outer Space, a blood-and-gore horror flick given a futuristic twist via special effects. But while these accusations have more than a little truth, it has been an incredibly influential film–and even today, in the wake of CGI effects, it still holds up extremely, extremely well.

The story is well known: the crew of an interstellar craft responds to what seems a distress signal, only to encounter a remarkably lethal alien life form that boards their ship and sets about picking them off one by one. Some of the special effects are weak (the alien spacecraft and the android “revival” are fairly notorious). There is little in the way of character development, the seventies film has a fairly slow pace, and the story itself is predictable; you can usually guess who is going to die next.

BUT. The art designs are incredible: the entire look of the film, from the commercial nature of the spacecraft to the iconographic alien itself (brilliantly envisioned by Giger) is right on the money. Director Ridley Scott encouraged his cast to ad lib from the script, and the result is a shocking sense of realism–and the somewhat slow pace of the film and the predictability of the story gives it a sense of relentless and ever-mounting paranoia that is greatly enhanced by the tight sets and camera set-ups. With its odd mixture of womb-like organics and cold mechanics, ALIEN is a seventies film calculated to send even the most slightly claustrophobic viewer into a fit of hysteria.

The entire cast, led by Tom Skerrit and Sigorney Weaver, is very, very good–and the film abounds with memorable images and scenes ranging from John Hurt’s encounter with the alien egg to Skerrit’s search of the ship air ducts to Weaver’s terrifying race against time as the ship counts down to self-destruct. Seldom has any film been so consistent in design, cast, direction, and out-and-out fear factor, and although certain aspects of ALIEN are open to legitimate criticism the end result is powerful enough to bring it in at a full five stars. A word of warning, however: you’ll need to send the kids to bed for this one. And you’ll probably be up half the night afterward yourself!

Ridely Scott is such a minimalist in Alien that many sci-fi nuts find it slow and unexciting. So many people prefer Aliens, its sequel, to this one. I think Aliens, directed by James Cameron, is another sci-fi masterpiece (and maybe the best action film ever made), but I think Alien is much better. In fact, I would say that it is among the best films ever made, in sci-fi, only second to 2001.

The plot absolutely lacks contrivance. All the plot points develop how they would naturally. And there are great surprises throughout the film. Even if you haven’t seen the film, you know about the chest-bursting scene. You probably saw it parodied dozens of times. But watch the scene where Ian Holm reveals his secret! That is one amazing scene! I actually saw the sequel first, so I kind of knew that secret, too, but it still shocked me. It was so well directed.

Notice how the dialogue works. It never particularly draws attention to itself. It actually reminds me of Robert Altman, how he directed such movies as Nashville, where many characters are speaking at the same time, and nothing seems more or less important than anything else. It is just like real life. Alien is one of the most realistic, documentary-like sci-fi films ever made.

Also notice the setting. The Nostromo’s design is so believable that I feel that I’m actually seeing a real space vehicle. The alien ship also beams with its spookiness.

The characters are also extremely believable. They are so well written that even the first character who dies is completely developed. If you get the DVD, they actually created dossiers about each of the crew members. It also has extra scenes which round out the characters even more. I think Ripley is one of the most endearing characters in film history. Even in the last two sequels, which were visually interesting but not very well written or directed, Ripley held my interest. I teared up when she died at the end of 3. If they made a fifth one, I would go, no matter how terrible I knew it would be. The acting is also top-notch. Ian Holm, a great actor, gives one of his best performances here. I love the last scene that he is in. Truly a master. And of course Sigourney Weaver could have just as easily been nominated for an Oscar for her performance here as she was for Aliens. I wish she would make more movies. She’s so talented.

The most important part of a film, in my mind, is the mood. And boy, does Alien have one of the most genuinely spooky movies I’ve ever seen. Make sure you watch it after the sun has gone down. Also, watching it alone will help. The special effects are kind of cheap, but Scott knows this well enough. He only shows the alien for seconds at a time. Besides keeping us from seeing the shoddiness of those puppets, this technique makes the alien seem all the more creepy and mysterious.

10/10, no doubt at all (BTW, the symbols all over the Nostromo are the same insignias as those of the Purina Dog Chow company)