A Game for Vultures

A Game for Vultures – 1979
In every war there are those who kill… and those who make a killing! 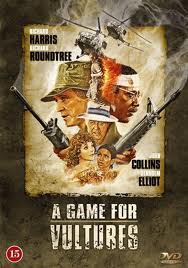 GAME FOR VULTURES is a rather confused story about a freedom fighter/ terrorist, an illegal arms dealer and an illegal shipment of helicopters to Rhodesia, but the story strands never really gel. Instead of a coherent plot we get a battle scene followed by sentenious speeches followed by a scene that doesn’t add anything to the plot. Other irritations include Richard Harris and Richard Roundtree playing Rhodesians neither of whom make any attempt at a Rhodesian accent, a freedom fighter called ” Sixpence ” and the black Scottish guy from PORRIDGE playing a murderous thug.

The version I saw on BBC 1 tonight was slightly different from a version I saw several years ago. A scene in the opening battle scene featured a Rhodesian soldier getting crushed by a runaway land rover, and an entire subplot featuring Tony Osoba`s character is missing. This is where he murders his sister at the end and he in turn is killed by his brother in law with a pitchfork