Being the adventures of a young man whose principal interests are rape, ultra-violence and Beethoven 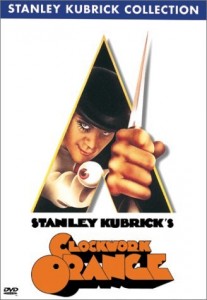 Review by Bill Slocum
Malcolm In The Middle,

People sometimes call “A Clockwork Orange” their favorite Stanley Kubrick film. Me too, except higher praise in my book is that it’s my favorite Malcolm McDowell film. McDowell’s portrayal of a vicious young hood up against a system every bit as cruel is what draws me in, and keeps drawing me in, time and again.
McDowell is a young fellow named Alex, who in a vaguely futuristic society goes gallivanting off on assorted crimes with his equally nasty mates until he finds himself in the hands of justice. To get out of prison, Alex volunteers for a new mind-altering technique designed to rid him of his antisocial impulses. But is the cure worse than the crime?
One of only two X-rated films ever to be Oscar-nominated for best picture, “Clockwork Orange” has lost none of its ability to shock in the more than 30 years since its release. It still attracts hard-core fans while offending others. I used to be a bigger fan, back when I was a college boy. I even took a first date to see this. Needless to say, there wasn’t a second date, though it’s not only for that “Clockwork Orange” hasn’t aged for me as well as some other films I can mention.
It’s a very good film all the same. Kubrick’s perversity and his structured style of storytelling are well tailored to an Anthony Burgess novel that operates like a boomerang cuckoo clock. The music by Walter Carlos, re-fangled classical melodies served up electronically, works very well with the slightly putrid color scheme and odd lighting to create a sense of prevailing unease throughout. In his other works, Kubrick too often tended to elicit either mechanical or hyper-emotional performances from his actors, but with the exception of Patrick Magee’s embarrassing turn as one of Alex’s victims, the approach actually works here because the film itself is something of a satire, boldly comical even in depicting brutal crimes like the murder of a cat-loving woman with a giant ceramic, um, sculpture.
But what makes “Clockwork Orange” worth repeat viewings, more than Kubrick’s cleverness, is McDowell’s lead performance. Though we get an education right at the beginning just how terrible a person little Alex is, McDowell invests him with such charisma, wit, and even grace that we kind of gravitate to him despite ourselves. “Don’t sing that song in the bathtub, Alex!” “Watch out for that milk bottle!” There’s no reason we shouldn’t wish Alex his instant karma, yet the lively McDowell gives us someone to perversely root for. His narration, like Richard III’s, is a marvel of mordant sympathy-stealing.
While the film raises questions about the necessity of being able to choose good or evil in order to be human, and how society casually corrupts the individual, I have a sneaking suspicion a lot of people gravitate to this film because it serves up generous helpings of nudity and ultra violence under a decorous umbrella of deep thought and even a vague spiritual dimension courtesy of the prison charlie. Kubrick knew how to make a trip in the gutter seem elevating.
However absorbing it is in all its parts, “Clockwork Orange” is a one-man show, and for me that man is Malcolm McDowell. The way he smiles so menacingly yet with real allure, wipes a smear of spit off his face, screams out how he’s seen the light while undergoing the Ludovico treatment, and maintains his weird bond with us the viewer is a marvel of morality-warping brilliance. McDowell had other great roles, but Alex is one for the ages. Is there anyone else who could make corruption seem so refreshing?

Review by Jack Gatanella
A Clockwork Orange (1971)
Definitely the best film ever made, or at least the most shockingly effective,
Stanley Kubrick’s A Clockwork Orange is a great film, but also stubbornly so, to the point where you have to either like it or dis-like it (as Pauline Kael said, it’s from the mind of a ‘mad German filmmaker mind’, ho-ho). It looks into the human ways like never before (rarely since as funny or questioningly) in the style that only Kubrick could do. Even though it was banned from the UK and Australia, the controversy isn’t compromised. The writing, direction and acting is at it’s highest peak form and just when you think it couldn’t get better, it gets to be the best.
Also, the breakthrough performance of Malcolm McDowell gets him at the top of the British actors list in my book (this performance most likely got him noticed in the film world). And all the elements surrounding him makes it perfect. Finally, the themes are terrific. The way the film shows how the government screws a regular fiend over is great. The film is provoking, if nothing else, which is what most of the great films should do, and it’s my personal favorite from Kubrick.

A Clockwork Orange (1971)
Review by Wayne Malin
Dated,
Story takes place in the future. It’s about Alex (Malcolm McDowell) and his “droggs” (friends) who go about and rape, rob and kill people just for kicks. Alex is caught and goes through a sadistic form of therapy to cure his violent impulses. It works…or does it?

This was considered a masterpiece in 1971. It was pretty strong stuff (the original rating was X in the US and it was banned completely in Britain) and introduced the term “ultraviolence” into our language. I loved it all the times I saw it in the 1980s (at least 7 times). I did think it was sexist (notice the decor at the bar) but found the ideas and themes fascinating.

Seen now it’s very dated. The violence in it is not even remotely shocking anymore and the ideas and ultimate message in the film (which totally changes the ending of the book) are old hat by now. To put in bluntly the film bores me now. It is extremely well made by Kubrick (the sequence with the “William Tell Overture” was great and how can you resist Beethoeven?) and powerfully acted (McDowell was just perfect) but it drags and I’m more bored than anything by it now. Perhaps I saw it too much in the 80s…

I’m giving it a 7–for its time it was very powerful…sadly, it just doesn’t hold up.

And I know I’m going to hear from those Kubrick fanatics who thinks everything he did was genius (even “The Shining”). Let the attacks begin!