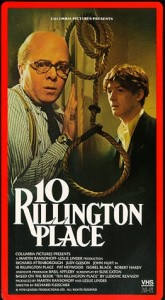 Not sure if anyone has ever made a better film than this?
The zenith of British film making, 10 RILLINGTON PLACE (the location since re-named) is a true story. John Christie (who last time I was there was still a star exhibit at Madame Tussaud’s waxworks museum in London) was the mega-ordinary, almost mousy south east Londoner who besides liking a good cuppa tea…killed people in his dingy little residence. Somewhat of a sexual predator (though this is hinted at, rather than depicted) Christie used his very basic scientific knowledge to offer “comfort” to such as pregnant young girls by way of his own in-house abortion that none actually survived. The case of young and fully dim-witted Timothy Evans (so brilliantly played by John Hurt) who comes to lodge and whose pretty young wife (Geeson) becomes another victim of the serial killer Christie represented the height of British injustice when Christie himself was able to manipulate the facts to point the finger of guilt at Evans himself and who was actually hanged for the murder of his wife and child. (The later-bestowed pardon would have been of little consequence I feel….the ultimate “too liitle too late”)

The film’s bleak depiction of immediate post-war Britain is just stunning, Attenborough deserved the Oscar for his amazing characterisation of Christie…a monster with a facade no-one thought to question. No clear-thinking and perceptive person could possibly watch this movie and not be affected in some way. The horror Is that there IS no horror, just a veneer of respectability and decency. I cannot offhand, nominate a more powerful or credible piece of film-making.

We have this film in our library and watch it on average ever two years – it has never aged or been less impactful!

10 Rillington Place – One for your collection